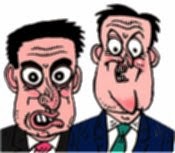 It's a shame that the noisy nights and mornings up Beaver Road never coincide with my restless nights. Had next door's musical alarm gone off any other day this week I wouldn't have minded. But it would wake me today when I was actually fast asleep at 4.30am.

I eventually got up shortly before 6am and did brekkie for both of us (me and my dog). He yummed his brekkie; usually he's a lot more picky. I'm wondering if "er indoors TM" has been feeding him stuff that I don't know about; he's certainly eaten better this week than he usuall does. Which is more than can be said for me. It's Day Four of "home alone" and the strain is begining to tell.
Over brekkie I watched "Secret Diary of a Call Girl". It's a good show; I could sell my body to strangers for cash. Or that is I'd be willing to. Whether I actually could do so is a matter of conjecture.

My dog took up his sentry post on the sofa from where he could guard the house, and I set off to work. As far as I was concerned the most important item on the radio's morning news was the launch date for the re-imagined "Thunderbirds" I'm quite looking forward to the return of the Tracy brothers. Mind you it's a shame that it's yet another re-make. There is so little on telly these days which is actually original.
I also had a wry smile about the Christian bakers who are facing legal procedings for refusing to bake a cake featuring a pro-gay marriage slogan. It's an interesting case. On the one hand is the pro-equality brigade campaigning for equality for all. On the other hand is the pro-religious freedom brigade campaigning for the rights of nutters to beleive there are fairies at the bottom of the garden.
Who will win this squabble will speak volumes about our society.

Work was much the same as ever; at lunch time I saxed, and after work I had the weekly sax lesson. My semibreves are more lke minims, and my rests are a little too active. But I could be doing a lot worse.
I then ran "Furry Face TM" round the block, and got a special curry from the Hong Kong Kitchen for tea. As I scoffed it I started watching a film I'd recorded. "Trapped in Space" started badly, and after half an hour I gave up with it. It was crap. Instead I ironed shirts and watched "Big Bang Theory" and then I watched the pre-election live televised interviews of the Prime Minister and the Leader of the Opposition.
Whilst Mr Cameron has acheived a lot, and he made many valid points, I cannot really have any faith in a Prime Minister who seems to be proud of the relatively recent proliferation of food banks in the country.
It was such a shame that the Leader if the Opposition then took the opportunity to come over as a bit of a tit. He hadn't so much had his hair done as had a wig nailed on to his head. and other than running down the Prime Minister (and was told off by the interviewer for doing so) he had very little to say. When asked if socialism was an important Labour party value he waffled of for five minutes without saying "yes". As the interview went on so he looked worse and worse.