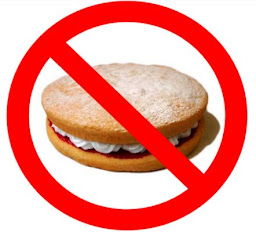 I woke in a sweat following a rather traumatic nightmare in which a heavily pregnant colleague was continually jumping from the roof of a double-decker bus purely because she could. When I woke it was half past midnight, and I didn't really get back off to sleep again after that.

I came downstairs to see our latest plan to keep Sid from peeing on the carpet had been a qualified success. "er indoors TM" had put Sid in the kitchen (which has no carpet) and had put the dog cage blocking the way from the kitchen to the living room, but in such a way that he could get inside it to sleep. Like all the dogs Sid likes sleeping in the dog cage. I came down to find Sid fast asleep in it, but with him in it, the dog cage was too heavy to move. And it is too big to climb over. And he'd not done "anything" anyway.

I eventually prodded him out of the cage and took him up the garden where he did several "somethings", then over a bowl of granola I watched an episode of "Good Girls" which turned out to be the last one. The story didn't so much "end" as "fizzled out" with my having no idea what had happened, what was going on, or what might possibly happen in any potential next season.

I didn’t quite laugh out loud as I then peered into the Internet. A chap I’ve known for nearly forty years had posted something to Facebook which was knocking religion. The thrust of his argument was why should he respect anyone’s religious beliefs purely on the basis of “that’s what I believe” with absolutely no empirical evidence to back up their position. It was somewhat ironic bearing in mind this chap is continually posting political rants to social media which are equally unfounded in any tangible or measurable way. I thought about pointing this out to him… but decided I didn’t need to.

Someone else I’ve only known for ten years had posted one of those “I’m here for you” memes to Facebook. I don’t post that sort of thing. I know (from bitter experience) that many of the people who make a loud song and dance on social media about always being there for others rarely fulfil the promise.

I set off to work on a rather cold morning. As I drove to work the pundits on the radio were talking about how  the government is planning on going back on what they agreed with the European Union; effectively there is effectively no Brexit deal and the Prime Minister is making out that this is a good thing. Am I the only one who sees that far from saving the UK over three hundred million quid per week, Brexit is increasing the price of the weekly food shop by about forty per cent? (figures quoted on the radio this morning). And is it any co-incidence that now the UK is out of the EU, the amount of illegal immigration goes through the roof as it is in the French national interest to send them our way? And just wait for the newspapers to catch on to one of the reasons for hospital waiting lists to be getting longer is all the non-British healthcare professionals are going home in droves because they don't feel welcome or safe in the UK any more.

I know it is now far too late to do anything about it, and I know what the result was, but this Brexit hasn't lived up to the hype, has it?

Once my piss had cooled down I popped into Tesco. Being short of marmalade I thought I might get some. I also got some grey flower pots which might well be idea for a rockery project I have in mind, some pens, and wine and beer (just in case).

Pembury's Tesco has improved beyond all recognition since I was last there. On my last visit we were bossed and ordered around the shops, being treated live recalcitrant five-year-olds by officious harridans. But today the staff were helpful and polite. Perhaps they've realised the advantages of not pissing off your customers?

I got to work. there was no cake. I would find it difficult to choose whether I prefer working in Maidstone or Pembury, but (it has to be said) there is more cake in Maidstone.

And with my bit done I came home. The traffic was rather less busy that usual this evening – I wonder what that was all about.

I also wonder what’s for dinner…