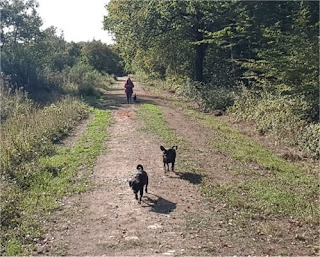 I was woken in the small hours by snoring; I’m not saying whose. I eventually nodded off, but was woken by "er indoors TM" having a set-to with one of the dogs. I expect it was Treacle; it usually is.

I gave up trying to sleep and came downstairs to let Sid out. He pootled a bit and did what he’d been sent out to do, more through luck than judgement though. He seems to have lost nerve control “behind”. Poor pup.

I made toast and peered into the Internet. Facebook was much the same as ever. People were trying to sell unwanted tat. Those with anything to say which was related to any specific theme had posted the same thing to every single group related to that theme. People were picking arguments with others that they knew they would never have to face. It was a shame that very few people seemed to have *done* anything though.

I had a look at my emails. I had a message. Regular readers of this drivel may recall I replaced a missing geocache two days ago. This morning came a message that someone would be walking past it today – did I want them to replace it for me?

I solved five more geo-jigsaws until "er indoors TM" emerged from her pit. We drove down to Orlestone church where "er indoors TM" had once hidden a geocache, but successive hunters of Tupperware had drawn blanks. There was a reason for that – there was a bulldozer vigorously bulldozing the exact spot where she’d hidden the thing.

We then had a quick wander round Orlestone Woods (where whistle training was more of a failure than a success) then came home for a cuppa, and I set off for yet another late shift.

As I drove the pundits on the radio were talking about the ongoing Brexit negotiations so I turned the radio off. I'm sick of hearing about it. Instead I sang along to some rather obscure tunes as I drove west. I took a little diversion just before I got to Biddenden this morning. Bearing in mind it will be a little while before I went this way again I thought I might treat myself to some supplies from the vineyard shop. I got a couple of bottles of Wantsum's "Imperium" ale for tomorrow, a bottle of their own red wine, some local honey, and no change out of twenty-five quid. It is commonly said that we should support our local businesses and craftspeople... but charity begins at home. I suspect that I could have got better stuff for a third of the price at Tesco, but time will tell. It always does.

I also took a little diversion at Pembury to do a couple of Munzee resuscitations. One of the Munzees had faded beyond recognition (so I replaced it) and one just hadn't had anyone come near in two years. But it was two hundred Munz points for me, and two more Munzee resuscitations to the current clan effort.

I got to work and had a rather typical shift. Periods of tranquillity were interspersed with periods of hyperactivity. If the work were to be evenly spaced out through the shift it would have been far more manageable, but that's hospital work for you.