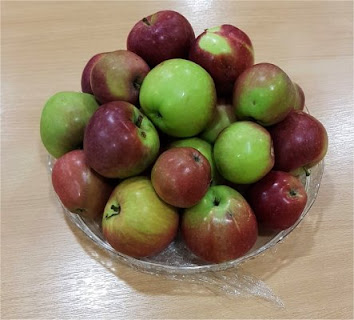 I slept like a log, and found I was actually able to move when I woke. It was something of a shame that this ability diminished as the day wore on and as my backache returned.
Over a bowl of granola (with not-gone-off milk) I watched an episode of "Good Girls" in which our heroes were in desperate need of a *lot* of money. I'm sure the show would make a lot more sense if I knew why they were so skint. I had a very quick look at the Internet to see it was much the same as ever, then set off work-wards

As I drove the pundits on the radio were talking about how schools are re-starting today, and were also talking about how the children have all fallen back on their educational progress. There was even talk of maybe delaying next summer's exams. Here's a radical suggestion - do the little darlings really need six weeks' holiday every summer? Had they all started back a month ago then some of that shortfall might already have been recouped.
There was also talk about how working from home has trashed the economies of Britain's inner cities. Those who cater to the commuters have lost their target audience. This got me thinking. What do we as a nation now do? Do we go back to the old ways of working in which people make (demonstrably) unnecessary expensive journeys to offices miles from home when they can clearly do the same job from home? Or do the people who charge a fiver for a cup of coffee go the same way as the gas lighters and the milkman and the rag and bone man and find another job more befitting to this day and age?
Harsh, perhaps. It does seem odd that people who are working from home are being criticized for saving  their money and not squandering it.

I got to work; there were apples at tea time. Personally I would have preferred cake, but free food is free food. I did my bit and came home via Lok N Store where I emptied my car of what I hope is the last of "Daddy’s Little Angel TM"’s tat.

Once home I put the dog-proofing into my car and took the dogs down to Orlestone Woods.
"Daddy’s Little Angel TM" and "Stormageddon - Bringer of Destruction TM" are staying overnight. Pogo has been pushed into the pond, the hysterical screeching is incessant, and I’ve had enough. I’m going to have an early night and lock the bedroom door. The next time they want to have a sleep over I’m going to have one of my own somewhere else...