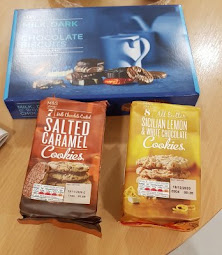 Again I slept like a log; it is amazing the difference the full-face CPAP thingy makes. Such a shame it doesn't do anything for a bad back though. I hobbled downstairs and saw Sid waiting by the back door. When Sid needs to go, he needs to go right away so I didn't hang about in letting him out.

With absolutely no milk at all (gone-off or otherwise) I made toast, and watched an episode of "Good Girls" in which one of our heroines was decidedly unmoral. The hussy!

Did I ever mention that I once met an unmoral woman? It was in 1990 in Reading. Happy days...

With everyone else still fast asleep I set off for work whilst it was quiet. As I drove I listened to the pundits on the radio pontificating on the events of the day. They do that.

There was quite a bit of talk of the Government's "kickstart" scheme in which people aged under twenty-five will be offered jobs by various private companies, the wage of which will be paid for by the government.

It doesn't take Sherlock Holmes to work out that what with the government's furlough payments drying up, it makes sense for employers to sack their current staff and employ youngsters for whom the government will pay. The government spokeswoman being interviewed said that she hoped that employers wouldn't do that, but there was nothing to stop them from doing so.

There was then talk of President Trump whose bizarre behaviour is exceeding the expectations of even his most severe critics.

The fellow is clearly barking mad, but still half the American electorate love him.

And house prices are at an all-time high, which is wonderful news for those who want to sell up and go live in something else. Personally it bothers me that people can get rich by buying and selling houses as a financial investment. So much for their being places to live? "My Boy TM" is talking about buying the house he lives in - the mortgage would be less than the rent he pays.

I got to the work's car park with my back in agony. I thought a little walk might loosen it up. Despite deploying a Munzee and catching a fairy (it too is a Munzee thing) my back didn't loosen.

I could have gone home and called in sick, but I didn't. I got on with my lot. As I had a cuppa at tea-time my piss boiled. One of my family was still posting utter scaremongering bollox to social media despite The International Commission on Non-Ionizing Radiation Protection  (which was set up to assess the impact of electromagnetic and acoustic waves on people and the environment) having spent seven years to show that there is no evidence that 5G mobile networks pose a threat to human health.

I suspect they stand to have phone masts being built near their houses and spoiling the views.

But on the plus side we had choccie biccies. Not that I was ungrateful for yesterday's apples, but choccie biccies are far better with a cuppa.
Posted by Manky Badger at 7:54 pm