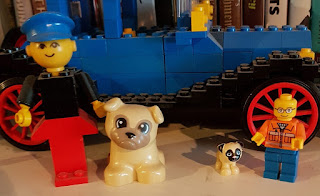 I would have slept better had "er indoors TM"’s phone not been bleeping constantly all night long.

I made myself some toast and peered into the Internet to see what I’d missed. It would seem that pretty much everyone bought their children guinea pigs yesterday. And there were one or two petty squabbles kicking off on Facebook, but that is Facebook for you. It never fails to amaze me just how nasty an argument people can work up over Lego or watching “Star Trek” or keeping a dog. There was also quite a lot of bitterness expressed in one of the Facebook groups about Ashford. Interestingly the local geocaching, munzee-ing, fishing and dog-walking groups seem free from squabbles. People only seem to want to get aggressive with those they know they will never actually meet.

But I got a reply to the question I’d asked on one of the Lego groups. I can get small Lego pugs, and large Lego pugs. I want a medium sized Lego pug (well, I want two of them) but it seems that the Lego corporation doesn’t make them in medium.

I sorted my undercrackers which had tumble-dried overnight (my life is so dull that sorting pants is one of its highlights) then we took the dogs down to Orlestone Woods for a walk. As we walked another dog walked right into me. The people with her told me she was blind. Poor pup. But she seemed to be enjoying sniffing about as she went.

Our dogs played nicely as we walked. To anyone watching you would think they hated each other; their play does sound rather worrying, but that's how they like it. Having jumped a ditch Fudge was guarding it and stopping Treacle from crossing. Both were seriously shouting at each other. When she eventually got over she yapped (it really was very sarcastically) at Fudge and charged off. Fudge then set off in hot and noisy pursuit of her, with Pogo generally charging about in the thick of it all. All three were snarling and growling at each other. When they've done this in Viccie Park we've had passing normal people trying to get involved and separate them when they are actually quite happy and playing.

Once home I spent a little while levelling up a section of shingle; "My Boy TM" then came round and helped me relocate our "Neptune" statue on to it. It is too heavy to move on my own. We chatted for a while about possible garden plans, then I set off for work. I didn't really want to go to work today. The weather was fine and there was a wedding blessing taking place that I would have liked to have gone to. But there it is.

I got to work and did my bit, spending much of the time peering out of the window. I don't mind weekend work when it is pouring with rain outside, but I'm not so keen when the weather is fine. Today's shift wasn't the easiest. Ideally I would have done the early shift. That was the original plan, but I was asked if I would swap, and if I help out for others, they will be more inclined to help me out when I want to swap.