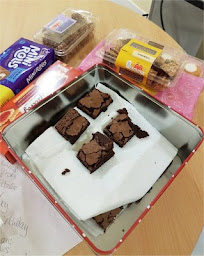 I woke shivering; "er indoors TM" had formed an alliance with Pogo and Treacle to capture most of the duvet. Knowing when I was outnumbered and outgunned I got up.

Sid was pleased to see me when I came downstairs; he's having a little holiday with us. I helped him out of the back door, and after a few minutes I helped him back in again. He's a bit unsteady on his back legs, bless him.

Actually having milk today (loads of it) I scoffed a bowl of granola as I watched an episode of "Good Girls" before setting off work-wards.

As I drove the pundits on the radio were talking about President Trump. The chap seems dead-set against postal votes in the upcoming elections, and seems to think that everyone who casts a postal vote for him should also cast one at the ballot box. He spouted some drivel about "testing the system" but it is quite apparent that he is advocating electoral fraud in a desperate bid to cling to power.

I stopped off in Maidstone before work. With a little time on my hands I thought I might have a little Munzee adventure. As part of this month's clan war we need to get some Munzee resuscitations. Last month we needed a hundred and fifty; this month we need ten. Ten is a tad more manageable. I got five today.

As I scanned random bar codes on random lamp posts I found myself walking through an estate of bungalows. I quite liked the look of some of them; I wonder if I can persuade "er indoors TM" to move to a new house?

I also found a bakery, and was seriously tempted to feed my face, but herculean self-control came into play.

​Work was much the same as ever; it was a shame that the disaster had to happen right on going home time. I was only half an hour late getting out. But (to be fair) it doesn’t happen that often, and staying late when required goes with working in a hospital.

Some days there’s quite a bit going on in my life… other days are rather dull…. even with cake.