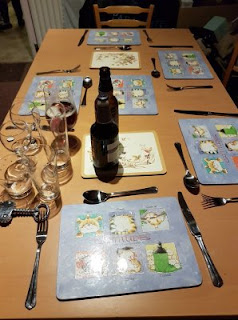 Again I slept for over nine hours, and woke to a rather windy morning. As I scoffed toast so Fudge asked to go outside. I let him out three times in five minutes. I don’t like to ignore him when he asks to go out (for obvious reasons) but sometimes he just wants to play silly beggars. This morning he seemed to be going out to eat a *lot* of grass.
As I scoffed toast I peered into Facebook. I was rather hoping to see what people had been up to yesterday. Bearing in mind I’d missed several possible fun outings I was rather surprised to see so little. And not a single photo from Dover beer festival.
A friend had posted something from the Channel Four website. There was an interview with an ex-fruit farmer who, having originally been a staunch proponent of Brexit was now rather angry to find that the European Parliament hadn’t ever actually come up with any rulings that had worked against his best interests. I think this chap was looking for someone to blame; because of his anti-European stance, all of his immigrant workers had gone home. With no one to pick his crops, his harvest had rotted in the fields and the chap is now bankrupt. It was all very sad from one perspective, and all very satisfying from the other. Sadly I can’t help but wonder if this is the way forward for the Brexit squabble from here on in. Endless “I told you so” which isn’t helping anyone.
As I peered into the Internet I listened to Fudge’s stomach gurgling. He was a couple of yards away on the other sofa and still his stomach was incredibly loud. I knew he was ill as he didn’t want any toast crusts.
I was all for taking him to the vet, but "er indoors TM" talked me out of it.

Despite the wind and the rain we took the dogs for a little walk. We took a rather curtailed walk round the park where Fudge had perhaps the most impressive bout of dire rear that I’ve ever seen. Better out that in, eh? And better out half a mile from home as well, eh?
We came home, dried and settled the dogs, and went out into the rain.

We went to the sorting office where "er indoors TM" had a parcel to collect. Everyone parks on the double yellow lines outside the sorting office even though it is common knowledge that the traffic wardens lurk in wait. "er indoors TM" dropped me off and came back two minutes later so as to avoid the Yellow Peril (have you noticed that traffic wardens are known as the “Yellow Peril” even though their uniforms have had green rather than yellow for years?).
We went to Waitrose where their poor selection of overpriced wine was second only to their poor selection of overpriced beer.
We went to John Lewis. "er indoors TM" has got a John Lewis card. She rarely shops there, but if you have one of their loyalty cards they send you a voucher for free coffee and cake once every three months. I might get myself one since their coffee and cake was rather good.
We went to Sainburys whose beer selection wasn’t that bad at all.

We came home. Fudge seemed to have perked up an awful lot. A walk, getting “it” out of his system and a little sleep had done him a world of good.
"er indoors TM" got busy in the kitchen, and "My Boy TM" and his branch of the tribe came round for a bit of dinner. Carrot soup, Sunday roast, tiramisu, cheese and port… Not too shabby at all.

We then watched this evening’s episode of “Doctor Who”. I consider myself a fan of the show; I’ve been watching it for as long as I can remember, but the show has reached a serious low-point. With characters about whom I really don’t care and plots that just don’t catch my interest, I wonder if it is time to give up with it…