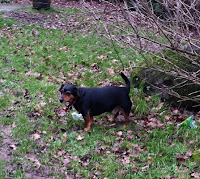 I woke this morning feeling like death warmed up. I ached all over and I had the world's worst headache. I wondered if I had this latest bug that is doing the rounds. I lay sulking for a few minutes then decided to get on with the day.
Over brekkie I sparked up my lap-top. The program which I use for cropping and creating all the blog pictures simply refused to run last night. This morning it was fine. I wonder what went wrong there. Mind you I had a look on some of the Internet help forums and this seems to have happened to other people.
I also had a look at the geo-map. Unfortunately next Sunday's plans have gone west; the route I thought would make a good walk round South London looks as though it would be far better done in a car. I spent a little while pondering over the geo-map looking for somewhere else, and found myself stuck on a geo-puzzle. If any of my loyal readers know the gradient of Noah's Ark please drop me a line.

I popped the lead onto "Furry Face TM" and we went for a walk. As we went through Bowen's Field Wetland Park I was surprised at how wet it wasn't. Then I realised that since I was last there someone had dug out all the drainage ditches. It is amazing the difference a few ditches makes.
We carried on to Viccie Park. As we walked we had a fracas with a Beagle, and met Ralph (the black pug who is jealous of Sid). On the way home we met OrangeHead on her way to the park. It is surprising how civil she can be when she doesn't have her little gang of cronies in tow.

We came home to find road works in full flow over the road. Pneumatic drills at full power. I was rather glad I'm not on nights at the moment; aren't whoever's doing the drilling supposed to give residents notice?

I set off for work, and having driven for two minutes I did an about turn as I saw "Daddies Little Angel TM" and "Stormageddon - Bringer of Destruction TM" walking toward B&Q. I stopped and bandied insults with them and then carried on to work. As I drove Women's Hour was on the radio. They were (seemingly deliberately) giving out mixed messages about the global zika virun pandemic.
They started off with indignation about the announcement from the Brazilian Government that women should avoid pregnancy because this virus causes microcephaly. That struck me as a sensible precaution to avoid misery, but an alliance of crackpots, bleeding hearts and religious nuts then came on and announced that such advice contravened people's inalienable human right *not* to have a healthy baby.
And then having given air-time to these loonies they then wheeled on a proper scientist who claimed there wasn't actually any proven link between the virus and the microcephaly outbreak anyway.
I wasn't entirely sure what I was supposed to think by the end of the article.

I got to work and had a typical day... as is so often the case on the late shift, pretty much everything of note in the day had happened before 11.30 am.
Having said that "Gotham" is on in a little while. I still feel rather rough... hope I stay awake for it...