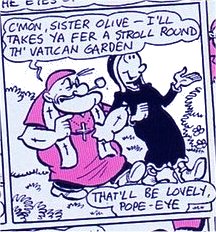 Another restless night waking long before I really needed to. Over brekkie I watched a rather lame episode of "Dad's Army" in which the writers hadn't really thought the plot through. Even though they didn't like it up 'em.
I then had a look-see on line and checked e-messages. And I sighed. Sometimes being in a minority of one does get tiresome. Why do people keep asking my opinion if they have already know what they want to hear?
As I fiddled about I was rather conscious of a smell. Before brekkie I'd done "Furry Face TM 's flea treatment. It involves putting a drop of jollop on the back of his neck. the stuff does have a strong scent. Usually I don't mind it, but today I found it rather overpowering.

I set off to work through the rain. This morning was surprisingly damp. As I drove the pundits on the radio were alll a-twitter that a previous Pope is alledged to have had a "lady friend".
The BBC has found some story digging the dirt on Pope John-Paul II. Bearing in mind the media's previous dirt-digging I suppose we should all be releived that he was alledgedly carrying on with a consenting woman of legal age as opposed to the usual sort of scandal that the pundits tout.
But (yet again) those that spread these stories wait until the star of their tales is safely dead before saying a word.

I got to work; and we didn't have the best of days. In much the same way as yesterday I spent probably too long looking out of the window. It rained quite a bit yesterday. Today was variable; alternately sunny then gloomy and overcast and rainy. It is amazing how much I notice the weather when I would rather be out in the stuff.

But the day passed. I came home to find "er indoors TM" hadn't gone bowling. Instead she'd boiled up a rather good bit of scoff. It went down rather well...