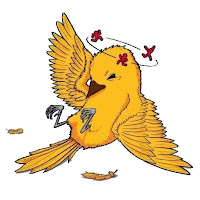 Bearing in mind how busy yesterday had been I didn't really sleep at all well. I was wide awake from 4am, and gave up trying to sleep shortly after 5am. I came downstairs and pootled on-line for a little. Not much had happened overnight.

And so to work. Last night as I left from Steve and Sarah's I'd had to scrape ice off of my car. I was expecting to have to do the same this morning, but the temperature must have risen overnight. The car was thankfully ice-free.

As I drove I put the radio on. There was a load of drivel about the various problems facing British farmers. It could possibly have been interesting. But it didn't grip my attention so I turned it off and squalled along to my music instead.
Being a geo-calendar day I needed to hunt down a geocache at some point today, and being on a rather long shift I thought I might as well get my find earlier rather than later. So I took a rather long-winded drive up to Hastingleigh where someone had magnetised a little container to a road sign. That kept me constructively occupied for two minutes. I've not got any more geo-calendar days for two weeks, and have now only got twenty-seven more days in total to fill on that geo-calendar. Mind you twelve are on days I'm at work. And there are fewer and fewer targets between home and work.

I then drove on to Morrisons. As I drove I lost count of the amount of birds that nearly (but not quite) splattered themselves on my windscreen. The entire avian population of Kent seemed to have a death wish this morning. Once at Morrisons I got my shopping, and the whole experience passed off rather uneventfully for once.

I got to work and did my thing for twelve and a half hours. The "nights and weekends" cycle of my working pattern does give me a *lot* of time off, but when I work the shifts are rather long. Todays seemed especially so. I ached for much of the day. Presumably that was an after-effect of yesterday's efforts in the garden with the fence.
I also spent quite a bit of the day looking out of the window at the rain. There's no denying that I don't mind working at the weekends half so much when it is raining. Mind you I did have a minor sulk because not finishing work until gone 8pm meant I would be missing out on a party this evening that a lot of friends would be attending.

I came home to find "er indoors TM" missing (as usual) and my little dog too tired to move. Presumably he's had a good walk today? He didn't want to go out his evening, and that suited me.
A quick bit of tea, bed, and another twelve and a half hour shift tomorrow...