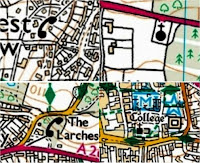 In contrast to the previous rather restless night I slept like a log last night. I finally woke shortly after 7am with a cold wet nose in my left armpit. For some reason I ached. As I got up I looked outside; all the cars were covered in ice. Just as well I had my early start yesterday and not today.
As I scoffed my toast I had a look-see on-line. An email from LinkedIn told me that I should know the critical things that successful people do before 8am. In my blacker moments I realise I've not been quite the financial wonder that the younger me had been hoping for so I clicked on the link and I read the article. It started off with a whole load of motivational platitudes and then said that everyone who is anyone spends money in a certain high street coffee shop before they go to work. Not just any coffe shop, but one particular brand.
Well, that was two minutes wasted. And LinkedIn then had the cheek to email me to ask why I hadn't taken up their offer to upgrade my membership so that I would pay them for that sort of rubbish.

Cheryl texted; consternation reigns at the local primary school. Apparently yesterday one of the more dislikable nine-year-old bullies pulled a knife on one of its victims. The head teacher has blathered a few platitudes and is now trying to carry on as though nothing has happened.
I can't help but feel that if the kids were faced with the cane for so much as farting on a Tuesday (like I was) then this sort of thing would *never* happen. When I was a lad we were terrified of our teachers. If anyone put a foot out of line they got the cane. Consequently no one put a foot out of line. One boy (incredibly rarely) had a sore arse for a day; a thousand boys behaved themselves for two years. I think that was rather reasonable.

I walked round to Newtown with "Furry Face TM" where we met "Daddies Little Angel TM" and "Stormageddon - Bringer of Destruction TM". We walked through Willesborough and back via Hythe Road and the path by the railway station. "Daddies Little Angel TM" thinks she's seen a UFO. She is somewhat vague on the specifics, but then most UFO sightis are somewhat vague on the specifics. I am hoping for updates.

Once home I had a look at the household accounts bearing in mind that today is pay-day. If I hadn’t recently spent out on replacing much of the garden fence I would be reasonably set for the month. As it is I’ve been effectively financially wiped out. Again. But on reflection the new fence has probably cost me the price of three or four serious booze-ups.
And I have a new fence as opposed to three or four headaches and a simular number of bouts of diarrhoea.

Postie visited with a letter from the hospital. Apparently the experts had agreed that I (probably) don’t have cancer; instead I have sialadenitis which is posh talk for a blocked salivary gland and which is also what I thought it was all along.
I’ve now got an appointment to have the lump in my neck injected with an x-ray opaque dye and then have x-rays of it done with a possible view to having the thing cut out. Can’t say I’m looking forward to either of those options.

I was feeling a tad tired so I spent the afternoon slobbing in fronnt of the telly catching up on all the stuff I'd recorded onto the SkyPlus box. Alan Partridge, Extant, Jericho and Sorry! filled in the time whilst the washing machine did its thing.

I finally could cope with no more telly so I organised a geo-stroll for a a couple of week's time. If any of my loyal readers fancy stomping about Kent. Surrey and both East and West Sussex please drop me a line. And if you know the GPS co-ordinates of where those four counties meet I'd *really* find that useful....