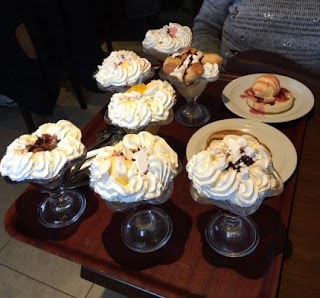 Despite having drunk rather a lot yesterday (by today's abstemious standards) I was surprised how chipper I felt this morning. I had something of a lie-in, and was woken at 9am by a succession of text messages wishing me a happy birthday.
Over brekkie I had a look on Facebook and saw another sixty birthday messages. I was really pleased to see so many people had thought about me.

We popped round to see "Daddies Little Angel TM" and "Stormageddon - Bringer of Destruction TM". The littlun has learned a new trick; when I shout out "Hands up who loves Grandad" he puts his hand up. Good lad !
A quick coffee and cake, and we then walked a rather circuitous walk to the New Chinmeys. I had no idea where we were going, and the route we took kept me guessing right to the end.
We arrived, had a quick pint, and then to my surprise many of the very people I would usually be walking with on an average Sunday arrived. I wasn't expecting that; it was a wonderful surprise.

We then spent a really good afternoon with chat interspersed with ale and a rather good carvery dinner. I'd not been to the Chimneys for a while; I'd certainly go back.

Pausing only briefly to play pooh-sticks we said our good byes, and we came home and walked "Furry Face TM" round the park. It was getting cold by now, but he seemed to enjoy himself as he terrorised the other dogs.

Being rather full from excessive carvery we gave tea a miss. But we had a rather good evening slobbing about in front of the telly watching "Benidorm".

Quite a good birthday really...