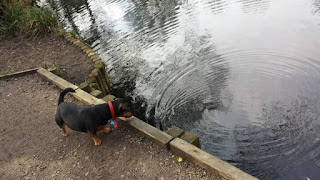 I had a rather restless night plagued with vivid dreams about how in an post-apocalyptic world I had somehow adopted an incredibly ticklish gorilla. I'm sure this probably reflects something deep-seated in my psyche. I'm not sure if I want to know what.

Over brekkie I had a look-see on line. Just lately Facebook has been bombarding me with adverts for a particular local computer company. The verbals about this company sounded really interesting, but on closer inspection it turns out that the whole thing is run by the father of one of my ex-cubs who until relatively recently sold kitchen tiles. His website claims he offers virus/spyware removal, system clean up, PC/Laptop repair and upgrade, network setup, broadband setup... in short not really very much more that I don't already do myself. Do people *really* pay good money to other people to do this stuff for them? Perhaps I should set up in business?
Mind you in the same feed I read an arrticle claiming that my mother, me, and my daughter are all aliens, and that aliens transmitted strange music at Apollo 10.
Perhaps I shouldn't beleive all that I read?

I did something to my right leg yesterday; the muscle down my shin hurt all day. This morning it was still painful, but my Patagonian Tripe-Hound wanted his walk. We took him down to Brockhill Paark where we had a rather good wander. "Furry Face TM" got into a race with a greyhound. Each of the greyhound's legs were longer than my dog. He didn't have a chance of keeping up. Mind you he would have done betteer if he'd saved his puff for running rather than for barking.
We then drove on to Folkestone where we had cake with the Rear Admiral and with Terry who was visiting. I would have liked to have stayed, but being on the night shift meant that I had an afternoon asleep ahead of me.

So I took myself off to bed for the afternoon. I woke to find the living room in uproar; "er indoors TM" was having somethinig of a spring clean.
We then scoffed a rather good bit of tea, and I'm off to work now. I must admit that I would rather not be working tonight. I had an invite to go down to the Cheriton Festival of Lights andf have a pint or two. And I had an invite to go off night-caching in Surrey.
Having just had a week off work when no one was doing anything, things always happen when I can't do them. Oh well... such is life. After all is said and done I'm not complaining. I much prefer not working the 9-5 routine so I shall take the rough with the smooth.