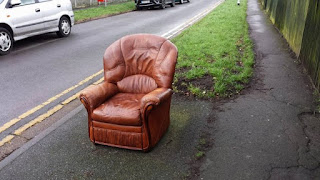 After a rather dull night shift I turned on the car radio to find the pundits were transmitting from a hospital. They were running a big feature on today's strike by junior doctors.
Much as I sympathise for the doctors, they are effectively being faced with that which the rest of the hospital staff have had forced onto them over the last few years. All this talk of weekend working is utter drivel; hospitals have been working every hour of every day of the year for as long as I've been working on them. It *really* bothers me that those calling the shots for the NHS don't seem to realise this. But (quite frankly) I'm sick of hearing about it, so instead I turned the radio off and I listened to Ivor Biggun and sang along with rude songs as I took a rather long-winded drive home.

Being a geo-calendar day I needed to hunt down a geocache at some point today, and not really having much of a plan for the day I thought I might as well get my find earlier rather than later. Hastingleigh wasn't *that* far out of my way home, and having made my quick find for the day I came home and took my little dog for a walk. We met up with "Daddies Little Angel TM", "Stormageddon - Bringer of Destruction TM" and Sid and walked with them for a while before leaving them to do their thing as we carried on with ours.
This morning "our thing" was checking on two geo-thingies of mine in the WIllesborough area. Other hunters of tupperware hadn't been able to find them so I was expected to go have a look-see. One was where it was supposed to be; one had gone walkabout.

As we walked home we found a random armchair on the pavement on Birling Road. I tried to get "Furry Face TM" to pose on it but he wouldn't.
As we came along the river "Furry Face TM" was straggling. As I do in these cases I shouted "come on you!" down the path at him. A passing looney took this as a chance to strike up a conversation and he spent five minutes telling me how he doesn't vote because he doesn't agree with the war that Britain has been fighting for the last thirty years.
If any of my loyal readers know what war this might be, please let me know.

Once home I was feeling a tad tired. Rather than falling asleep in front of the telly I thought I'd go to bed for an hour. But only an hour; I had stuff to do in the afternoon.
I woke up at 5pm.

I woke feeling rather groggy so I watched Monday's episode of "Gotham" and then had a look on-line. I'd had a friend request from Soo Law on social media. Not knowing anyone of that name I had a look to see who she was. Apparently I have four Facebook friends in common; none I've seen for three years. Apparently she is a kite flier. On-line kite fliers annoy me. Everyone wants to be your friend on social media but if you see them in real life most of the ones I meet won't even say hello.
I deleted the request. I'm rather fussy as to who I have on social media.

There was also consternation on the geo-forums. A few days ago I heard about some people based in Germany who were pretending to have found thousands of geocaches in the UK. Some of mine were amongst those they claimed. I'd been told they were lying about this so (out of interest) I went and had a look at the paper logs. These Germans hadn't signed my ones so I removed their e-logs at the time and posted about this on the Wherigo group I manage. Whilst a faked log on yet another film pot under a rock isn't a major issue, Wherigos take a *lot* more effort and so I thought the matter worth mention there.
The matter has now been blown out of all proportion. What particularly boiled my piss was that what I had originally written for one forum had been misconstrued and then re-posted elsewhere quoting me.
After all is said and done it was a matter of utter triviality whiich now looks as though I am being utterly pedantic over something which barely warranted a mention.

"er indoors TM" came home and picked up what postie had left. There was a letter from the garage reminding me the car's MOT was due. I shall have to phone them in the morning; haven't they seen that I've already booked it with them? And my geo-parcel has arrived. I can start on my new project soon.

We then had a rather god bit of dinner spent watchin more episodes of "Benidorm" and speculating on the career of Tim Healy. He's been in quite a lot of things I never knew about...