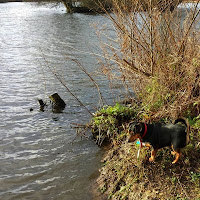 I took a little while settling last night. The noise of the rain kept me awake for a while. I suppose the two rather serious hikes over the last three days had taken thier toll.
I got up shortly before 7am and scoffed brekkie. I had it alll to myself as my little dog was still snoring soundly. I scoffed my brekkie whilst looking on-line. The Internet was working this morning (unlike late yesterday evening). Not much of note had happened overnight; the most exciting development was a rant about Bristol council banning the picking of blackberries. Bearing in mind we are still some six months from blackberry-picking season I couldn't help but wonder what that was all about.

I then spent a little while looking for a short geo-walk that I might do on Thursday (Thursday is a calendar day) and posted the idea on Facebook. I forgot to advertise yesterday's walk as widely as I might have done, and it turns out that there were people who would like to have come along, Woops!
I've come to the conclusion that a walk round Leybourne Lakes looks like a good idea. If anyone would like to come along (beaing in mind it is probably not wheelchair friendly) just join in the Facebook event.

I then took "Furry Face TM" for a walk. We went through the park where he was incredibly well behaved; actually walking at heel for much of the time. He put the fear of God up an Airedale terrier, and we had a near miss event with a dog the size of a cart-horse. He got very grubby chasing ducks through the mud at Singleton Lake, and we came back via the vets. He had an appointment for a booster for kennel cough.
He knew he had an appointment; normally we can walk into Pets at Home (where the vets are) with no problems. Today he wasn't having any of it. He was terrified. But for no reason. The vet was really good with him and very gentle as he gave the pup a once-over before squirting the vaccine up his nose.
My dog's in good health; the only problem is his weight. And (in all honesty) he has the same problem that all of have; his gob is bigger than his bum. He is now officially "fat".

I got home and had a phone call from the broadband people. First of all there was someone from the call centre in Bombay (who I struggled to understand) explaining that they'd tested everything with their technical stuff and it was all working fine. They were ratehr miffed when I said I'd tested it by using it and it didn't actually work.
They suggested an upgrade to fibre-optic and put me through to someone in Newcastle (whose accent was equally incomprehenisble) and they offered me a rather good deal. Or what may well be a good deal if it actually works.
The new router arrives in a few days time. Here's hoping.

I spent tha afternoon in bed where I slept soundly until finally woken by the rain at 4.30pm. I would have liked to have slept longer; I *know* I shall be feeling it later.
I'm off to the night shift now...