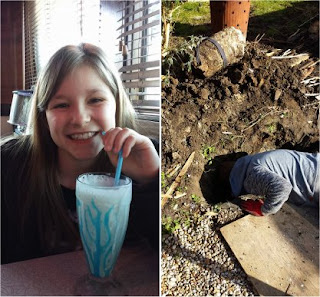 I had a rather tiring night. Perhaps if I'd been a bit busier the time might have passed quicker? Mind you in my line of work quiet is usually good.
Rather than going straight home I went round to collect the first fruit of my loin. It was good to have brekkie with "My Boy TM" and Lacey. Much as I like the night work, it is a lonely pursuit. "er indoors TM" went off to work at 8.30am on Wednesday morning. Since then (other than professional handovers at work and pleasantries at the till in Morrisons) I saw "er indoors TM" fleetingly yesterday morning and I've not actually spoken to anyone for two days.
Together with "My Boy TM" and Lacey I went to the American Diner and despite having to wait for a while we had a rather good brekkie. I had the traditional fry-up; Lacey had pancakes with bubble-gum milk shake. "My Boy TM" only had a brekkie roll as he'd had seventeen chicken nuggets last night. And the whole lot cost eight quid. Bargain.

Pausing onliy briefly to buy a half-price tree in Bybrook Barn Garden Centre we went on to B&Q where I spent nearly two hundred quid on the ingredients for a new back fence, then we went home to crack on with phase two of "Operation Back Fence". Regular readers of this drivel may recall that a week ago "My Boy TM" and I were faced with a huge lump of concrete that we needed to get out of a hole in the back garden. At the time I wrote "...But after two hours we have exposed a lump of concrete which is about a foot square by about two foot deep. We can rock it, but we can't lift it.
... "Daddies Little Angel TM" currently has my drill. I've told her I shall need it back on Monday so's we can use it to drill the concrete. "My Boy TM" says that if we drill it to b*ggery we can then twat it to destruction with my sexy new hammer. I'm lucky in having a son who understands all the technical jargon".

It was a good plan in theory. In practice drilling the lump of concrete to b*ggery was easier said than done. IN fact it didn't get done. We didn't actually burn the drill out, but smoke was coming from the drill's insides and the lump of concrete was utterly unscathed. Simularly, repeated vigourous twatting with both my sexy new hammer and my more substantial cooking hammer didn't make the slightest impression.
Faced with such an intransigent boulder we dug and dug and dug. Eventually we had the boulder loose enough to rock it so we slipped an old belt around its base and managed to forcibly hoik the thing out.
It is so easy to type that; the sense of acheivement of actually doing so was indescribable. If either of of had been physically able to do so we would have done the happy dance. Instead we both collapsed.

I drove my assistants home, then took "Furry Face TM" round the park for a walk. By this point I was beginning to flag somewhat; being up all night combined with shifting the boulder had taken its toll. It was as well that he behaved himself on the walk.
Once walked I had a cold cross bun lunch and took myself off to bed only to be woken a couple of hours later by "er indoors TM" saying that Cheryl had invited us round for dinner.

I leapt into action... or that is I tried to leap into action. Leaping hurt somewhat. Oh how I ached. But we went round to see Dan and Cheryl. We had a wonderful tea, and then watched a film. "The Martian" has been on my list of films to see for a while. Apart from some glaring inaccuracies about the Martian atmospheric pressure (for dramatic effect) the film was very good.

Today has been a rather good day...