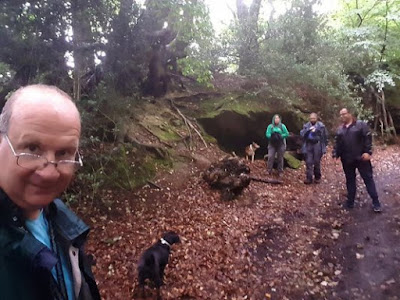 One positive thing of having done two night shifts is that I then sleep like a log. However I did spend much of the night wracked in extremely worrying dreams in which a geo-friend had become a mass-murderer; his modus operandi was to shove a trumpet up the bum of his victim and play brass band music to kill them (as if a trumpet up the bum wasn’t lethal enough). I wonder if I should tell him about this. Or if not him, maybe a psychiatrist?

My piss boiled as I looked at Facebook over brekkie. Due to the wonders of technology invading your personal space, my Facebook feed usually features adverts for anything I’ve looked at on the Internet. Today I saw several adverts for sturdy gazebos. One piqued my interest; the advert clearly said fifty-three quid, but when you clicked on the link it said over seventy quid.
I’ve reported the advert as a misleading scam but I doubt anything will come of it.

I got myself and the dogs organized, and we set off for a little adventure. As we drove up the motorway the pundits on the radio were still talking about the moves afoot to form a new political party. However these moves have hit a snag. It turns out that none of those people who don’t agree with the Labour or the Conservative parties’ policies don’t agree with each other either.

We made our way to the car park in Oldbury Wood, and it wasn’t long before our friends joined us. Earlier in the week a new series of geocaches had gone live in these woods and I’d asked if anyone fancied coming out with me and my hounds to hunt them down. Eight of us (four humans and four dogs) had a rather good walk… I say *walk* - little Rocket was carried. He’s only a very small puppy and so was in the pup-papoose for the whole way.
Oldbury Woods are rather pretty – it was a shame that when we started the rain was persistent, and it got heavier as we walked. I would think those woods would be rather pretty in the sunshine. Mind you just lately it has been so hot and so sunny that we all agreed that one wet day wasn’t such a bad thing.

As is usually the case our route was prescribed by a series of geocaches. There were only a dozen… *only* a dozen. They weren’t the easiest to find. Whilst some were straight-forward, some took an age to uncover, and one eluded us entirely. I’ve always said that people who hide geocaches fall into two camps – those who want their caches found, and those who don’t. I think today’s were hidden by someone subscribing to the second theory.
That’s not to say anything against the series… Someone had clearly put in a lot of time and effort to create today’s little geo-series. It gave us a good outing for which I am very grateful. I can imagine on a dry day the challenge of the trickier hides would be fun. However when the water has got to your pants, patience tends to evaporate. But despite the rain we had a good walk. Walking with friends is always fun; it is good to catch up – and I took a few photos too.

We said our goodbyes and went our different ways. I took the dogs home, had a bite to eat, settled the hounds and set off to Margate.
For the last couple of years "Daddy’s Little Angel TM" has been banging on about starting her own business. Whilst I’ve thought it a good idea in theory, in practice I’ve probably taken a “yeah whatever” line. But I was wrong. She’s acquired a corner shop in Margate. However her stock room was running low, and what with Sam having pranged their car at the weekend, getting supplies was problematical. So – Daddy to the rescue. Or (more accurately) Daddy’s car to the rescue.
The trip round the cash and carry was quite the adventure; "Stormageddon - Bringer of Destruction TM" only destroyed one melon, but (to be fair) when he destroys something, he doesn’t do any half-measures.
We then took the supplies back to the shop where (hopefully) they will be snapped up by the masses. I then had a little nosey round the shop and round the flat above the shop. The shop looks quite the Aladdin’s cave. The flat has promise. It looks something less than perfection at the moment, but flats always do when you move in.
The long-term plan is that the business will be such a success that I will be able to retire to a life of luxury courtesy of the most recent fruit of my loins.
Here’s hoping.

Home again (through the torrential rain). Once home I got out the shears an gave myself a haircut, then fell asleep in front of the telly.
"er indoors TM" boiled up burger and chips, and we then slobbed in front of the telly with a dog apiece. You can tell when Fudge has had a good walk – he gets soppy in the evening.