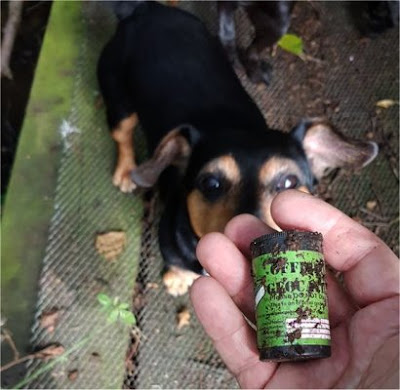 I woke this morning to find that it didn’t hurt *quite* so much when I moved.  Then I had a realization that I walked the dogs all the way round the park without whinging yesterday evening. So now I know it takes about five days to recover from a session of trampolining.
Over a brekkie of granola and coffee I watched an episode of “Orange is the New Black” in which there was minimal filth, and then I had a look-see at the Internet. Seeing a new geocache had gone live only two miles away I leapt into action.

I was soon at the Warren car park and was looking for a “Twain Hut” (whatever one of those is). I met another hunter of Tupperware who had also come out for a look-see, but eventually he gave up. After forty minutes I found what I was looking for, probably about ten yards from where the GPS said it should have been. Randomly buried in the leaf litter it had been hidden by someone who had only ever found four caches, and (I’m sorry to say) was a perfect example of why people need to gain experience in finding film pots under rocks before they go hiding them.

I then drove out to Margate to visit "Daddy’s Little Angel TM" and "Stormageddon - Bringer of Destruction TM". We had a cuppa and watched some rather strange cartoon on the telly before wrestling a fridge freezer down the stars. I thought I’d gone over to do some painting but that is for another time. All I had to do was dispose of the fridge freezer. I took it to the tip and came home again. I did stop off to hunt out a geocache or two (I do that). I found one; another seemed to be in someone’s back garden.
Once home I had a sandwich whilst Fudge squeaked and barked at me constantly. He’s got used to my taking him for a walk the moment I come home, and he has come to expect it. He won’t give me a moment’s peace when I come home. Treacle don’t care, but Fudge always wants to go out immediately.

Once I’d scoffed a sandwich I got the leads onto the dogs and we drove out to Brabourne. There are a couple of geocaches out in the woods which I thought might form the basis of a different walk for the dogs.
They did.
We had a rather good walk across and along the footpaths which were (mostly) very well marked. We did have a couple of episodes round Bircholt Court where a young spotty lad on a tractor tried to tell me I was trespassing. I explained I was on the footpath to which he said my map was out of date. I showed him the map on my phone coming directly from the nice people at Ordnance Survey. That took the wind out of his sails, and I went on to piss on his chips by asking if he might be mistaken, or if his boss had ordered him to lie. He didn’t actually crap himself, but he did go a rather vivid shade of crimson. Shortly after that we found a *huge* marquee being erected which was blocking the footpath. I got chatting with the blokes putting it up. They said they thought it was on a footpath, but they just put it where they are told.
As we walked Treacle was well behaved. Fudge on the other hand rolled in several different fox poos and tried to fight with a frog. Odd that Treacle was the one who smelled when we came home.
I’d planned the walk so’s we would come past “The Plough”; a pub which (twenty years ago) was the first meeting place for the (long defunct) reptile club. We got there to find the place closed with six-foot high fences cordoning the place off. Fortunately “The Woolpack” wasn’t too far away. The nice man behind the bar gave the dogs a bowl of water, and I had a crafty shandy.
​
Geocache-wise… Oh dear. The caches had been put out by a scout group, and generally caches put out by a scout group are put out in a hurry with pretty much no care in their deployment whatsoever. These two were part of a load of about twenty which had been put out a couple of years ago. Most of them have long been archived by the geo-feds and (quite frankly) I’m not surprised. I tried for some of them a couple of years ago with no joy. I did find both of my targets today, but only after having read what previous finders had said. One was thirty yards away from where it should have been, the other forty yards away.
On the plus side one hadn’t been found for over a year so I got to claim “resuscitation”. It was when I found this one that I realized I’d dropped my pen, so we backtracked to find it. We did find it… four hundred yards behind us.

As I usually do I took a few photos whilst we were out. Once home (and once Treacle had been bathed) I put them on the Internet for the delectation of the masses. I hope the masses appreciate them.
And with "er indoors TM" having a better offer for the evening I fed the dogs (and myself) and settled down in front of the telly for an evening of Netflix… I know what will happen. I will be asleep in front of the telly for most of the evening and I will be wide awake from three o’clock tomorrow morning…