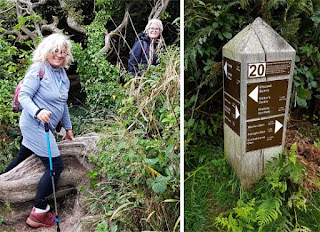 I woke up earlier than I had intended, and over brekkie watched an episode of “Orange is the New Black” in which not a lot really seemed to happen. I tried to get Fudge to eat his brekkie, but he wasn’t having any of it.

With "er indoors TM" taking "Stormageddon - Bringer of Destruction TM" to visit family today, Fudge and I set off on a little adventure.
As we drove the pundits on the radio were wittering on about religious stuff. First of all they were emphasizing the importance of youth in today’s church. They were going that forty years ago. As a religious nut in the early eighties I can remember forming the distinct impression that as far as the church was concerned, anyone over twenty-five years of age could get knotted.
There was then a lot of hot air about what the Pope should or should not say during his visit to Ireland, and this was followed by a frankly unbelievable discussion about the concept of “faith”. Having an unshakable belief in twaddle and crackpot-ery was somehow admirable.

We got to the helipad car park near Fairlight. Many years ago I was locked in the public toilets there by a passing maniac who thought me and my mate were going to vandalise the place. We were held there until a policeman arrived and told the passing maniac to let us go. I wish I knew who that idiot was; in today’s society I could sue him for millions.
Aleta and Jackie soon arrived, and we set off on a little walk. First of all along lanes and paths (that were very familiar to me) leading to Fairlight sand quarry; somewhere where I and many friends used to play wide games. I always say that Fairlight sand quarry is one of my favourite places; it was, but the last time I went back there was a couple of days before I got married. We used to play there all the time. Children clearly don’t play there any more – the place is terribly overgrown with weeds and brambles. Such a shame.

From the quarry we then tackled the Firehills. I wanted to do today’s walk because I can remember the Firehills from my youth. "er indoors TM" *didn’t* want to do today’s walk for exactly the same reason. The Firehills are pretty, but the operative word is “hill”. There are serious ups and downs.
At one of the hilliest points we saw someone had set up a tent overlooking the sea. What a beautiful place to set up camp.
As we walked we saw a couple of footpath closures. As we debated where to go, people walked out of one of the closed footpaths. We had a chat and were told that for all that many paths were closed, all were still passable. We carried on regardless – the paths *were* passable if a little steep.

We’d started walking at nine o’clock. The rain was forecast for mid to late afternoon. It arrived at mid-day just as we were at the furthest point from the cars. It didn’t help that I’d not packed a decent raincoat. But what can you do when caught in the rain? You can sulk or you can make the most of it… either way you end up equally wet.
Having said that we did cut out the last part of the walk in order to get back to the cars quicker.
It was a good walk - I took a few photos as we walked, but I pretty much stopped when the rain started.

Caching-wise… we knew that quite a few caches on the Hill Hike were missing. Originally we’d planned to go walking with the chap who’d hidden them and we would combine our walk with a maintenance run, but he wasn’t free today so we’d offered to do maintenance. We had to replace six caches and put new logs into three more. There are those who would whinge about having to do so; I was glad to help, and wish more people would help out in this way. The Hastings Hill Hike is now good to go again.
Of the caches that we did find some had been created by a 3-D printer. They were rather good. Two were little puzzle boxes that were tricky to open. I’m sure they are great fun in decent weather, but in the rain they were a game I could have done without playing.
Two caches involved solving anagrams. Do the phrases “Punky Carrot” and “Flamenco Nettle” mean anything to you?
And the last cache of the day hadn’t been found since July 2017 – another resurrection cache. That’s eight I’ve found in total; six in the last two weeks.

We got back to the cars, said our goodbyes and made our way home. As I drove I rather thought Fudge might have slept. He didn’t; He was poised and barked at every splash every time we drove through a puddle. I might just have driven through one or two more puddles than I needed to.
Once home I put on dry clothes. Much as I like going out for a walk, there is no denying the fact that I also like dry pants. Fudge ate the breakfast he’d turned his nose up at earlier, and I scoffed a sandwich before watching a bit of telly. It don’t watch itself, you know.