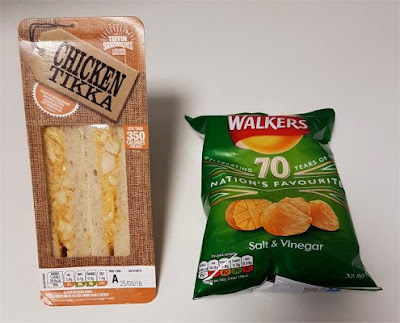 I didn't sleep at all well last night; a restless Treacle made for a restless everyone. I woke at one o'clock to see Fudge give me a very indignant glare before he got ap and went off to his own bed.
I got up ten minutes before the alarm was due to go off, and over the last of the cheapo-bargain shop's granola I watched this week's episode of "Gotham" which was rather good. It would probably make more sense if I could remember all that was going on in that show; I shall watch the lot one episode after another at some stage. Probably when I find myself utterly unable to move after I next go trampolining.

I set off for work; as I drove the pundits on the radio were interviewing the shadow Brexit secretary who gave today's version of the Labour party's stance on Brexit. When challenged that what he was saying was completely at odds with what yesterday's Labour politician had said he just blanked the interviewer and repeated himself. Such a shame that this is typical of the Labour party at the moment; such a good idea in theory, such a stupid proposition in practice.
There was then an interview with the real Brexit secretary who was specifically asked about the nation's insulin supply, and who specifically refused to answer the question. This is entirely what is wrong with the entire concept of Brexit. It is being made up as we go along, and being made up by people with clearly no idea what they are doing. Politicians would be far more believable if they gave straight answers to straight questions or said "don't know". Lies and evasion convince no one.

There was also talk about the nation's GCSE results which were announced today. The windbag being interviewed implied that there are moves afoot to have no pass grades as such; instead the actual score required to obtain each grade would move up and down each year depending on whether that year's students are (on average) clever or thick.  the idea being the top ten percent get the top grade, the next ten per cent get the next grade... the actual score required for that grade depending on the score achieved by those taking the tests. It really will be made up as it goes along.
Hardly fair... But then life isn't.

I stopped off in the general vicinity of Horsmonden to hunt out that geocache I didn't find on Monday. It had been replaced in the meantime and feeling very pleased with myself that I had found a film pot tied half way up a bush I walked back to my car.
It was at this point that "er indoors TM" messaged to say I'd left my sandwiches at home... So I got myself a sandwich before going in to work. What I could have got from the corner shop at home (or a certain supplier in Margate) with change out of two quid cost three pound ninety pence (not that I'm counting the pennies).

I did my bit at work. One of the drawbacks of being seconded to Tunbridge Wells is that the journey isn't a straight motorway run (and it is about twenty minutes longer) so it makes for a longer and more tiring day.
A bit of dinner and an early night might be on the cards…. I always say that – one day I’ll have one.

​Yesterday was quite the adventure. Today wasn’t…