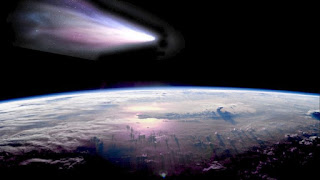 Having had a spate of sleeping well, last night I had a terrible night; sleeping for maybe three hours. I went downstairs far earlier than I should have, and spent an hour playing tug o'war with Fudge. I was hoping that he would be quiet and soppy; he was bouncy and boisterous.

It's two days since Christmas and that dog has now destroyed most (if not all) of his new toys.

The roads were incredibly quiet as I drove through what would usually be rush hour traffic. I suppose most people are still off for the Christmas break.
Something in the news made me sit up and take notice. In future every time a child attends a hospital's accident and emergency department, the visit will be recorded in a national database intended to pick up child abuse. Whilst I agree with the sentiment I cannot help but feel it will merely flag up how some parents take their children to hospital every time the child so much as farts. Or what if any child is naturally accident prone. I lost count of how many times the most recent fruit of my loin was in casualty over the years.
She phoned today - apparently she's still suffering from what I have tentatively diagnosed as "Cat Scratch Fever". If only she'd listen to her old dad...

Yesterday I mentioned that Gerry Anderson had died. This morning the radio featured an interview with the actors who provided the voices for some of the Thunderbirds puppets. And my piss boiled. Here was an opportunity to speak with actors who had been part of something special to so many people -something wonderful. And it was an opportunity which was totally wasted. The interview couldn't have lasted for more than a minute. It was abruptly and rudely cut short to make time for a (frankly rubbish) article about some incredibly geeky inarticulate children who were allegedly using science to make unrecognisable music from wet wine glasses.

My piss also boiled at the standard of driving. Why is it that when the roads are so quiet everyone drives so badly? Indicators are useful; if only people would use them rather than randomly going wherever the voices in the head might prompt. It never fails to amaze me that the worst drivers are those who have taken time and effort to have their company's name and logo emblazoned on their vehicle. What kind of advertising is that? And if you are going to blatantly queue-jump at the petrol station, why do it in a car covered in notices telling the world who you are?
Whilst getting petrol I noticed a new discount store where once (many years ago) there used to be a pet shop. I like discount stores - when I next have a minute I might just pop in and have a nosey.

To work, where I did my bit. And then home again. The radio featured what I confidently predict will turn out to be a blatant lie. Comet Ison and Comet 2014 L4 (PanSTARRS) are predicted to be very bright next year. So bright that they will supposedly outshine the full moon. Come to the astro club next year. I confidently predict that there will be no bright comets, and if there is, I will eat the astro club's raffle...