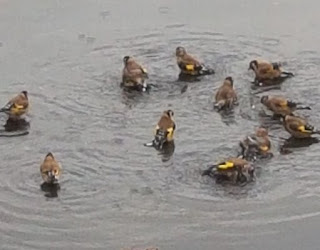 I came downstairs and chivvied Sid outside where he did absolutely nothing. It is worrying when he does nothing outside as he then usually craps on the kitchen floor ten minutes later.

I watched a little telly then sparked up my lap-top. In a novel break with tradition there wasn’t any arguments kicking off on Facebook this morning. It won’t last. There wasn’t much news in my in-box either so I got dressed and headed work-wards.

"er indoors TM" had been in her car and had re-tuned her radio. Turning it to Radio Four yesterday was the work of seconds - it took an absolute age to do the same today.

Once I'd finally tuned it in, I drove off. Some rabbi was having a rant. Apparently science has discovered that what was originally thought to be type one diabetes in very young children is actually not the same disease as type one diabetes in adults. Science has also discovered a better treatment for them. This rabbi wasn't pleased that science has taken so long to work this out. I would have thought that this rabbi might have had a word with his boss for allowing diabetes in the first place, but what do I know?

I drove up the motorway, not knowing I'd driven straight past two new geocaches in Hollingbourne that had gone live just as I'd left home. But once I'd parked the car I went for a little walk and deployed a Munzee whilst I was at it. As I do. I've deployed quite a few near work; so far not a single person has gone out looking for them, but I remain hopeful.

Work was work; I had my appraisal today. Work seems to be happy with me... which was something of a victory. I also spent a minute or two too long watching the antics of goldfinches bathing in the puddles on the flat roof outside the window.

As the day went on I heard a name that I'd not heard for a while. I won't say who it is, but if you are thinking of getting any building work done, the cowboy who stuffed up our attic conversion twenty years ago is currently active in the Maidstone area where he is still taking people's money and running. It is a funny old world; I get the police call round because someone wasn't happy with me when he tried to whip my dogs, but rogue builders can carry on taking people's money with impunity.

With work done I popped into Aldi. It seemed as though pretty much everyone else had as well. And about eighty per cent of those in the shop seemed to be dragging an ill-behaved breakdancing brat with them. The badly behaved children weren’t just shrieking and swearing and throwing things around the shop, they all really were thrashing about as though in the grip of epilepsy. What was that all about?

I brought shopping home; we scoffed some of it. I really should be thinking about going to kip soon – I’ve got an early start tomorrow.
Posted by Manky Badger at 9:13 pm