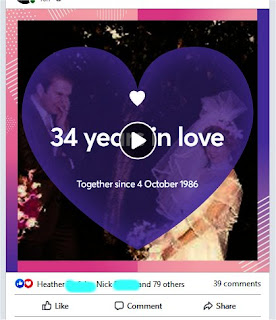 Once I’d had a shave I made some toast. I had some of that expensive honey I’d bought at the vineyard shop with it. It was… in all honesty just the same as every other jar of honey I’ve had except that Tesco are knocking out jars of the stuff for one pound thirty-five pence a go, and this stuff cost over six quid. Ever been had?

I had a look at Facebook as I scoffed toast. The nice people at Facebook had made a video for our wedding anniversary. That was nice of them. I posted that on-line, and soon quite a few people had pressed the “like” button.

"er indoors TM" appeared and fed the dogs. There was a little quarrel between Treacle and Pogo over brekkie as there so often is. But what might have been a petty contretemps soon became a full-blown punch-up as Sid came in on Pogo’s side and launched an all-out attack on Treacle. It was all over as quickly as it started (as dog squabbles so often are) but it was rather exciting at the time.

During a lull in the rain I quickly walked the dogs round the block, then we settled them and went for a little drive to Hastings. As we drove through Brookland we saw signs advertising a new farm shop. The Old Tractor Shed Farm Shop has only been open for a few weeks, and unlike other little countryside shops I could mention (!) they don’t seem to be selling stuff at ridiculous prices. We got some cakes and veg and cheese, and carried on.

We drove to visit mother-in-law who was having trouble with a leaking roof. She’d had the roof fixed relatively recently, and yesterday another builder had looked at the roof, crossed his arms, tilted his head, sucked air in through his teeth, and told her that she’s had the cowboys in. Most builders do this, but I think this builder might have had a point.

Once home we had yet another cuppa, and with a little spare time I geo-puzzled. It was rather good to find some geo-puzzles that weren’t jigsaws. And after a little puzzling we’ve now got a few more walks for the next few weekends.

It smells as though "er indoors TM" is boiling up a rather good bit of dinner for our thirty-fourth wedding anniversary… Here’s hoping… ideally we would have gone out for dinner somewhere, but what with all the COVID restrictions I’d rather not. As we found at Pizza Hut last week eating out is a chore now, rather than a pleasure.