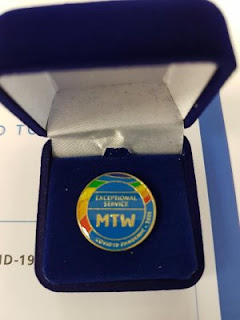 I slept well; it was a shame to wake to the sound of torrential rain. I did plan to drive my car to the garage with a boot full of dogs and then walk the dogs home. Instead I drove the car over myself, left it with the nice garage people, and "er indoors TM" collected me before brekkie.

As I scoffed toast (rather later than usual) I peered into the Internet and was frankly amazed at the attitudes being expressed on one of the work-related Facebook groups I follow. The group has a predominantly American membership, most of whom are very loud in their constant condemning of President Trump; both politically and personally. The level of hate and vitriol expressed at Mr Trump has been quite impressive. But following this morning’s revelation that he has tested positive for COVID-19 he is now officially “a patient”, and consequently is now the subject of pity, concern, care and prayers. Over the last few (thirty-nine) years I have seen this time and again. Heath care professionals (of all flavours) have varying tolerances for the general public but won’t hear a word against “a patient”. Aren’t they the same people?

And prayers? What is that all about? Presumably asking God to sort out a problem that God probably set going in the first place?

I then found myself at something of a loose end. The dogs (and I) didn’t fancy going for a walk in the monsoon that was outside. The areas of the lawn I wanted to re-seed were under water. And I couldn’t go to the Lego shop before work as my car was up on blocks.

So I spent an hour writing up CPD. Dull, but it needs doing. It is a legal requirement that all formally registered healthcare professionals keep themselves up to date on professional matters and be able to show that they have. Keeping up to date with your job is easy enough. After all, everyone does that. But providing evidence does take some doing. But I live in terror of being one of the five per cent of people who are asked to provide that evidence every year. I’ve been writing that work-related blog for years. I wonder if I will ever have to use it?

With the rain showing no sign of easing I geo-jigsaw-ed for a while until it was time to go to work.

With no news about my car from the garage and "er indoors TM" needing her car today to go visit the birthday boy ("Stormageddon - Bringer of Destruction TM"  is six today - six! - where do the years go?), "er indoors TM" drove me up to the train station. I got my ticket. Twelve quid. I'm sure that if I were to do the journey more often I could get a cheaper weekly or monthly ticket, but it looks to be far cheaper to get to work by car than by train.

Whoever it is that runs the trains does themselves no favours.

I had been looking forward to doing the crossword in the free paper that you find on the trains, but there weren't any free newspapers today. Do they still do those, or are they another casualty of the pandemic?

I got to work and di my thing. As I worked one of the top bosses came round. I (and several others) got an award for "Exceptional Service during the COVID-19 Pandemic". I must admit I don't think that I did anything exceptional; I just showed up at work when I was supposed to. But nevertheless the bossess pinned a medal to my chest.

I did *far* more for where I used to work, and the bosses there thanked me with a knife in my back... but we'll draw a line under that (one day...)