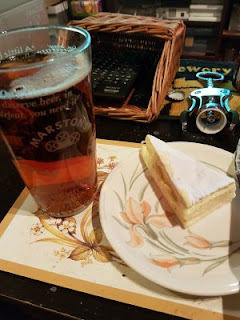 As I scoffed toast I kept glancing at our smart meter which (supposedly) records our gas and electric usage. I’ve thought there was something wring with the thing ever since we had it. It seems to think that we have used half our day’s ration before six o’clock every day.

I rolled my eyes as I peered into the Internet this morning. There was quite a squabble kicking off on one of the Lego-related Facebook groups again. You’d be amazed how nasty it gets on those pages of the Internet. One person wanted to know why Lego don’t sell glue with their kits and was asking for advice on what glue everyone else used. Was it a wind-up? Possibly. But there was a lot of nastiness being bandied about. Much like there is just three miles down the road.

Events just three miles down the road are making headline news half-way round the world. There was an article in the Los Angeles Times talking about the digging up of much of Sevington to build a lorry park where lorries will wait now that the Brexit regulations are coming into effect and causing hours of delays for traffic. The article interviewed locals who were up in arms; they didn’t vote to have their village dug up to build a lorry park…

I wonder what they thought would happen when the open borders closed? Did people *really* not see this coming?

As I drove to work the pundits on the radio were talking drivel as they usually do. President Trump seems to have staged a miraculous recovery from coronavirus and was staging an open-air meet-up of his supporters. But despite dishing out face masks to the masses at a political rally he wasn't wearing one himself, nor were any of his followers. From what was broadcast it didn't seem to be a political rally; more of a rabble-rousing. But that is what the rabble want, and it is the rabble that do the voting.

There was also talk about next year's school exams. They've been put back a few weeks and will now take place in August which was being portrayed as one of the worst things to have ever happened to the British educational system. Endless experts and headmasters and teachers were wheeled on. All of them were unanimous in loudly declaring that postponing exams by less than a month was detrimental to pretty much the entire universe and everyone who inhabits it.

Is this *really* a bad thing? I can't see the problem, but am I being cynical when I say that I'm used to working in August.

As I drove to work so my phone beeped. Our Munzee clan has reached level one, which was something of a result.

Work was work. I had the last of the apple crumble, then did my thing. There was a lot of talk of CPD too. And with work and thing done I came home where we watched this week’s episode of “Bake Off”. It was rather good – even if we had to re-wind because I fell asleep half-way through.