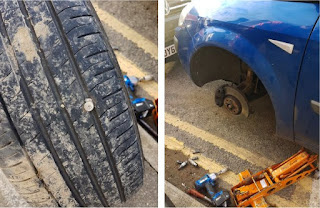 The night shift was much as night shifts are; I was glad to see the relief arrive. As I drove home the pundits on the radio were interviewing the business secretary. Some government advisor or other has attacked the government as many people simply cannot afford to live on the payments they get under the latest lock-down arrangements. The minister felt that the allegation that people were being forced to prostitute themselves was all very sad, but nowhere near as sad as the effect that coronageddon is having on the economy. The minister seemed somewhat frustrated that the public at large can’t seem to grasp the (supposed) fact that the economy is far more important than people.

Doesn’t this sum up all that is wrong with our society?

I got home and went to bed where (despite having been awake all night) I lay awake for an age before finally nodding off. Again I couldn’t get warm. What is it with trying to sleep during the day? I scoffed some toast, and then as it was "er indoors TM"’s lunch break we took the dogs out. The plan was to go out to Great Chart…

We got to my car to find it had a flat tyre.

The dogs were excitable and the car was parked, so the tyre could wait. We walked the dogs round the park where we had a mostly good walk. There was one minor episode when Pogo got overly friendly with a passing ball of fluff, but that passed off without too much fuss.

Once home I thought I’d better sort out the puncture. Having been driving motor vehicles since 1980 this is my first ever puncture so it was all rather a big adventure for me. I googled “tyre repairs within half a mile of me”. The first place that came up was in Providence Street. Whilst it is more than a stone’s throw away, if I was to shout, you would hear me in Providence Street. I could walk there in less than two minutes. If you were going to drive anywhere at all from Providence Street you would go past my house. The nice lady at “Mobile Tyres” told me that I was “outside their area”. I did ask how they could possibly stay in business with such a small area of operation, but the sarcasm went over her head.

I phoned a few other local tyre repair people only to find that the phone was always being asked by the same people in Providence Street.

I finally got through to a company whose phone wasn’t being asked by the lady round the corner. This chap said he would normally be only too happy to come and help me, but his big end had gone and he was waiting for help himself.

Halfords advertised tyre repairs on-line. When I phoned them they said they didn’t do tyres.

Eventually I hit on the idea of using the breakdown cover that comes with my car insurance. I should have done that first.  The insurance people sent out the RAC who were with me within an hour.

Have you ever had a tyre changed? I was amazed. The nice man jacked up the front of the car and soon had the front wheel off. He then got the spare (I never knew my car had a spare) and put it in place, but was insistent that this was only a very temporary fix and I should go to a proper tyre place as soon as possible. He stuck the wheel with the punctured tyre in the car’s boot and went off on his way.

It was with something of a sense of relief that I then had a functional car again, but it needed a proper fix. I phoned the tyre people up the road (the ones who don’t do call outs) and they said they sort me out right away. I drove round at a snail’s pace. Perhaps the spare was up to greater speeds, but I wasn’t going to chance it.

And half an hour and twenty quid later the tyre was fixed. In retrospect it was all a big adventure, but at the time it was all rather stressful. I suppose any tyre can get a puncture at any time, but having been without a car for two weeks it seemed odd that it should go only a day after it had been in the garage for a fortnight.

A rather good bit of dinner; a bottle of red wine and a decent helping of amaretto… I should sleep well.
Posted by Manky Badger at 9:37 pm