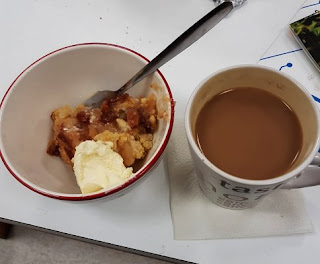 I woke from a rather vivid dream in which I had been appointed Donald Trump’s stunt double and was facing all sorts of criticism as I was unable to talk rubbish to the degree that the public was expecting.

I made toast, watched a little telly, then peered into the Internet to see what had changed since last night. There had been an interesting development on one of the Lego Facebook pages. People have been advertising pristine complete sets and sending out half a dozen random broken Lego bits, so now when selling stuff via that page, any photos of what you are selling now have to have your name on a scrap of paper to prove that what you are advertising is what you are actually selling.. Some people (buyers) liked this development, others (sellers) weren’t convinced.

I managed to get dressed without falling over any canine-related obstacles and set off to work on a rather dark morning. As I drove the pundits on the radio were talking to one of the head honchos of the food industry who was up in arms about the threat to the UK posed by American chlorinated chicken. Having loudly announced that she didn't trust the ministers involved with the ongoing negotiations about food deals with the US, this woman flatly refused to explain why she didn't trust them. "Do you trust them? I don't" was her refrain. Does she know something we don't? Being given her chance to express herself live on national radio she just made a twit of herself. It happens quite a lot on the morning news program - which is one of the reasons I like the show so much.

Also making a twit of herself was some northern GP who was ranting about the threatened local lockdowns for the north of the UK. She felt that the pub closures were wrong. Going to the pub (seemingly constantly from her description) is apparently the only pleasure in life for many people up north. She felt that the amount of coronavirus spread in pubs was just a drop in the ocean compared to the amount spread in taxis. This woman then ranted for five minutes about the danger to life and limb posed by taxis which (she claimed) breed far more virus up north than they do down south. As I listened to the radio I somehow felt ashamed that I live within ten miles of the south coast. If nothing else, coronaggeddon has *really* aggravated the north-south divide.

Pausing only briefly in Sissinghurst to deploy a horoscope Munzee (it cost me over a quid, you know) I was soon at work where we not only had cake, but we had apple crumble and cream too.

I was rather pleased when I heard that I was going to spend the afternoon on a Microsoft Teams meeting taking part in a distance-learning course about blood-borne parasites. But I was disappointed. The meeting.... let's just say that having done a post-graduate certificate in distance-based learning a few years ago it struck me that the speaker did pretty much everything I'd been told not to do. I shall blog about it in another place in a day or so.

"er indoors TM" boiled up a rather good bit of dinner, and with it scoffed I slept in front of the telly through most of the rest of the evening. I hate it when that happens…
Posted by Manky Badger at 9:25 pm