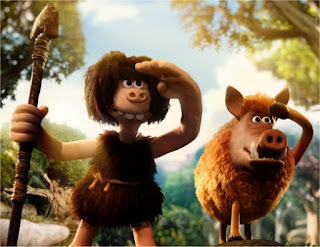 I slept well; I say “well”. I slept for eight hours, but had some rather vivid dreams and woke feeling rather more worn out than when I went to bed. I had a quick bite of brekkie then drove my car to the garage. On Monday the nice man at the garage had said to drive it a bit and take it back and maybe they might be able to identify the oil leak. I got there, left the car with them and the nice man gave me a lift home.
As I opened my birthday cards Fudge got told off. He’s been chewing a large plastic chew-toy. When Treacle chews anything like that there are plastic fragments everywhere. When Fudge chews the same sorts of thing there are never any plastic bits. He must swallow them all. He found himself facing a lifetime ban of plastic chewy things. The dogs got given a rawhide chew each instead. Fudge started chomping his; Treacle immediately scrambled behind the sofa and under the wall units looking for somewhere to hide hers. Eventually she crawled out from under the shoe boxes without her chew. She’d stashed it somewhere under there. She never eats her chews right away; she always hides them for a bit first.

Bearing in mind “Hannah”’s failure yesterday, I had another go at my GPS unit. It worked perfectly. I wonder what went wrong yesterday? I programmed her up for the Romney Marsh (as one does from time to time) and "er indoors TM" and I took the dogs out. First of all to Great Chart. Yesterday I had a message through Facebook from someone who had just walked my new series of geocaches near Great Chart…
Oh dear…
Originally I had planned to have the route going across a footpath, but with dogs loose on the other side of a stile I decided not to use that footpath, but I hid a cache under the stile. Someone found the cache and showed it to the people who live in the house just up the road, presumably thinking that locals would be as impressed with a sandwich box as they were.
I was a tad concerned as it has always been my experience that people don’t want geocaches near their houses. I suspected this one would soon go missing if it hadn’t already. But I was wrong. It was still in place this morning.

We then drove down to the Romney Marsh where we hunted out three special geocaches (or as special as a wet sandwich box on a marsh can be). “Hannah”’s field trials seemed to go well. It was a shame that Treacle had to paddle in stagnant water, but what can you expect from a dog on a marsh in February?
As we drove home my phone rang. It was the garage. Having scrubbed the outside of my car’s engine on Monday and having driven a hundred miles (well, ninety-six) they had given the thing a good going over to see if they could work out where the oil leak was coming from. But there had been no leaking at all. I was rather pleased about that. We’ve agreed to monitor the leak. I say “monitor”; I don’t know a crankshaft from a big end. I’ll ask the nice man at the garage to have a look when I next have to go back, or I shall wait for the engine to explode.

Seeing as it was my birthday we went to the Beefeater and had a rather good dinner. A rack of ribs and a lump of chicken, chips and a trifle. Not all on the same plate, but I wouldn’t have minded.
From there it was only a short hop to the cinema to see the latest Aardman film; “Early Man”. I won’t say what happened, but I can thoroughly recommend the film.

And then a quiet evening in… In years gone by I would have been out on the lash for a birthday… I’m getting old.