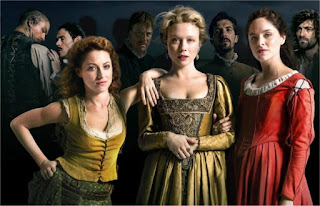 I was up with the lark today - out of bed at five o' clock. Half an hour earlier than usual. After my morning ablutions I had brekkie whilst watching an episode of "Plebs" on Netflix. Grumio had got the two-bob-bits after eating an apple he found in the toilet, and there was an epic battle between religion and medicine to cure him. In the meantime Stylax got chatted up by someone who wanted to be “firmly behind him” (result!) Not bad for less than a tenner each month, eh?

It was cold and wet and dark as I set off to work. The cold, wet and dark (added to the early hour) helped incredibly as I acted rather suspiciously near a lamp post in High Halden for geo-reasons.
As I then drove on to work the pundits on the radio were spewing rubbish. There is a fine line between reasoned spiritualism and patent nonsense, and this line was crossed a few times this morning which (to be honest) is unusual for any non-Christian on the radio.
After half an hour's exhortations on the benefits of gardening as a practical alternative to organised religions there was an article about the interactions of a merino sheep farmer and a surfboard-fashion designer in Devon which was actually far more interesting than it sounds.

I stopped off in Pembury to get the information I needed to solve a geo-puzzle. I thought better about solving the puzzle there and then; I felt a "potty emergency" on the way. I was glad to get to work; even gladder to get to the little boys’ room.
With twenty minutes to spare I went to the works canteen for a full English breakfast. Like last week's, it was rather good. However despite being like last week's in every way it was nearly two quid more. I can only imagine I didn't get the staff discount this time. But I didn't a have my staff ID on me, so I didn't quibble *too* much.

Work was busy. Often when I work at the weekends it rains. I don’t know what the weather was like today; I really didn’t stop long enough to look out of the window. I hope this isn’t the way of the future for me.
Mind you I came home through rain, hail and a few flurries of snow.
Once home we made the bed with just a little help from Treacle. Have you ever made a bed with a pug/spaniel cross trying to help? It was rather entertaining. I had a little look at my accounts, then "er indoors TM" boiled up a rather good bit of dinner as she does. And with that scoffed "er indoors TM" went bowling and I got the ironing board out. Shirts don’t iron themselves, you know.

​As I ironed I watched the first two episodes in the new series of “Jamestown”. I can remember the first series being rather good. This series… there’s no denying that Jocelyn’s bosom heaved. But that was probably about the only reason to watch the show.
I shall give it another chance when the next episode comes out. The show might improve. And the bosom might heave again… Hope springs eternal…