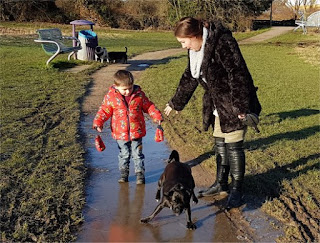 When we made the bed yesterday I decided not to have quite so many blankets. I woke up rather cold at four o’clock and put the blanket back.
Over brekkie I saw my professional regulator had posted on Facebook on a subject that will haunt me for ever. They had released a statement on the case of Doctor Bawa-Garba who has been found guilty of manslaughter following a terrible incident in which a small child died. I see the Secretary of State for Health has also got involved and said that clarity is needed about drawing the line between gross negligence and ordinary errors. He went on to say that doctors should learn from - not fear – mistakes. Whilst no one can deny that the mistake that was made was awful, hospitals are rather full-on stressful places. And when a mistake is made, the consequences are far-reaching for those on both sides of the error.
Spending years to qualify for a job in which any mistake will land you in prison isn’t conducive to recruitment and retention of staff, is it?
Who of us can say truthfully that they have never once made a mistake at work?
(And again I felt physically sick as I mentally re-lived the summer of seven years ago)
I had an email telling me that a new geocache had gone live. Ten miles north requiring ropes and harnesses and tweezers.
They say everyone plays the game differently.

I got the leads onto the dogs and we went out. As we walked out we met nice-next-door who was scraping the ice off her car. She fussed the dogs and I tried not to snigger. I can’t look her in the eye; whenever I see her all I can think of is the porn-star squeals and screams she seems to delight in performing.
We went on to meet "Daddy’s Little Angel TM" and "Stormageddon - Bringer of Destruction TM". We had rather good fun stomping on the ice on the frozen puddles as we made our way to McDonalds. The McDonalds on the orbital park is ideally placed; it is far enough out for a good dog walk there, and there is a play park on the way home. Having filled up with sausage and egg McMuffins at McDonalds we then went “Granddad-fast” on the roundabouts. No one was actually sick, but next time we will do the roundabouts first.
I took a few photos as we walked. Quite a few…

With dogs walked we said our goodbyes (by high-fiving on the swings). I came home and seeing it was dry (ish) and not *too* cold I spent half an hour working in the garden. I continued filling in the holes round the new fence posts which had settled (as "My Boy TM" said they would), and I got some bags of rubbish together. I then had a minor road trip.
I drove out to the Renault dealership. I’ve bought my last two cars from there; whilst my current car (hopefully) has some miles left in it I wondered if I might just see how much replacing it would cost. It will cost far more than I was expecting. When I bought it on 30 April 2010 I paid eight thousand pounds for it. The Office for National Statistics says the annual inflation rate is currently two point seven per cent. Allowing for an over-estimate of three per cent, I would have thought that a similar car today from the same supplier would cost me ten thousand pounds. They wanted fourteen thousand.
I have said before that the quoted official inflation figures bear no relation to reality.

Being somewhat taken aback I drove down to the tip where I unloaded the garden rubbish then went to Matalan. There was a young mother shrieking impotently at a hoard of children through which I had to force my way to get to the menswear section. As I found the shirt I wanted I heard a rather loud smashing of crockery and glassware behind me.
I didn’t quite laugh out loud, but it was close.

Once home I spent the afternoon washing and ironing whilst watching “The Crown” on Netflix. So far it is rather good; it features Matt (Doctor Who) Smith as a young Prince Philip.
"er indoors TM" came home, boiled up a very good plate of scoff and went bowling, and I watched more of “The Crown” whilst trying to stop the puppy licking my arm. Like many people I rub the haemorrhoid ointment “preparation H” onto new tattoos to help them heal. Treacle seems to like the taste of the stuff….

I was off work today since I worked yesterday. Today was supposed to be my day off.
It was rather busy…