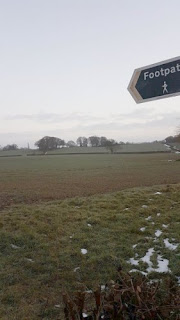 I woke just before five o'clock with a pounding headache. It was as well I had to get up at that time anyway. Over brekkie I watched an episode of "F is for family", the latest thing I've taken to watching on Netflix. It is rather good... if you like that sort of thing. As I watched telly my Fudge snored in his basket. When I went to go upstairs he heaved himself out of his bed and looked at me as if to ask to be carried upstairs. I carried him to my bed where he settled whilst making strange squeaking noises. He does that when he's tired.

I set off to work shortly after six o'clock. In contrast to the week that has just gone, this morning wasn't cold or icy. I liked that. I stopped briefly for geo-purposes in High Halden just as dawn was breaking. The view was rather pretty.
I then made good time to work. As I drove the pundits on the radio were wittering about iambic pentameter in historical verse and its connection to the human heartbeat. This was followed with some utter drivel about all the breeds of snowdrops that the Victorians bred only to have them all die of fungus infections. (Yes - I thought it was a waste of the licence fee too).
I turned the radio off and listened to my rather strange choice of music for half an hour. When I turned back to the radio there was a documentary about how it is disrespectful to chuck away worn and damaged copies of the Bible and the Koran. Rather than risking religious ire, a couple of rich nutters have obtained several miles of caves in the Middle East. and have made it their lives' work to respectfully entomb damaged holy tomes in said caves.
I wish I had enough money to go round the world gathering up old books and sticking them into my huge cave. If I had enough money to do that, actually doing that would be the last thing I would do with my money though.
Having far too much money is wasted on some people.

I got to work with twenty minutes to spare. I considered having a fry-up in the canteen, but this is becoming something of a habit and bearing in mind I'd been promised a carvery after work I gave it a miss. You can probably imagine my disappointment when I got a message shortly after I'd started work telling me the carvery trip was cancelled.
I sulked a little as I got on with work. But not that much. I had a rather busy day, and as I worked I felt rather worn out. I wasn’t feeling quite one hundred per cent today. I was glad when home time came.

Since we weren’t eating out (and there was no rush to get home) I took a little diversion into a village which was (sort of) on my way home. There are a few geo-puzzles in Horsmonden which require you to wander round the village to find out things. I *could* have found things out and then gone on to find the secreted Tupperware, but instead I just got the answers to the clues I needed and then came home. It was raining; farting about has some limits.
Once home I geo-puzzled a little. I say a little; a few hours is more accurate. I’m puzzled out now. I shall watch the telly for a bit. It don’t watch itself, you know…