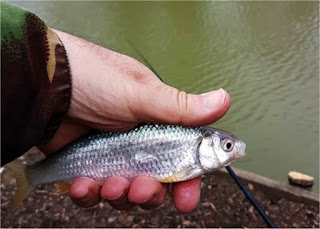 I slept like a log. I got up and had this idea that if I set the kettle going it would be ready for my morning cuppa once I’d had my ablutions. As ideas go, it was a stroke of genius (even if I do say so myself). It was a shame that once I’d had my shave I came to a kitchen full of fog and the kettle had boiled dry. The thing seems to have a problem with the cut-off switch.
I watched an episode of “Star Trek: Discovery”, then got dressed and set off to collect "My Boy TM".

We went to the co-op for some  pack-up lunch. I got two bags of crisps and a small bottle of pop, then we went over the road to Brookfield café for a fry-up. I didn’t tell the first fruit of my loin about my diet until I’d scoffed half of my brekkie. But at least I hadn’t had toast first.

Suitably replete we drove to Smarden and Sam’s Lakes for a day’s fishing. We’d had a rather good time there a month or so ago (even if it was in sub-zero temperatures) and thought we might have another go.
We found somewhere that *wasn’t* a mud bath and set up. Within five minutes I had a decent sized fish. I was rather pleased about that. I was less pleased that the second fish took three hours to arrive. The fishing today was… odd. We would both catch several decent fish within ten minutes (sometimes with both of our rods having bites at once) and would then go for half an hour or more with absolutely nothing happening.
Mind you "My Boy TM" caught one of the biggest carp we’ve ever had between us over the last few years, and I had a rather impressive bream (if you are impressed by bream – not many people are).
I took a few photos whilst we fished. You can see them by clicking here.

When the fishing was slow I enjoyed the view; Sam’s Lakes is a beautiful place. I expect it is glorious in the summer months. However it is incredibly noisy. There are trains that thunder by with annoying regularity. There are all sorts of aircraft that have incredibly loud engines doing aerobatics overhead. And when the planes and trains eventually shut up, there are all sorts of unsettling growls and screams from the big cat sanctuary next door.

By three o’clock everyone else who was fishing the lake had packed up. We gave it another hour. We would both have liked to stayed longer, but it was getting decidedly colder, the sky looked like rain was on the way, and we’d neither of us had a fish for an hour.
We came home.

I was pleasantly surprised to be able to park outside the house. I unloaded my tackle (as one does) and took the dogs round the park. Our walk was uneventful. Fudge didn’t try to hump or fight anyone or anything. Treacle didn’t cower in terror from anyone or anything.
How dull!!

With our walk done I had a shower, and sat myself in front of the telly until "er indoors TM" came home. She’s boiling up dinner now…