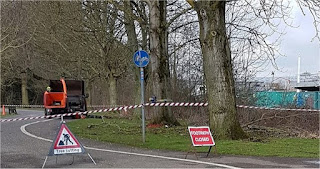 I stood on the scales today and weighed in at one hundred and seven point nine kilogrammes. In imperial terms that’s a loss of five and a half pounds in a week. I know from experience that a *lot* of weight comes off in the first week of any diet, but if I could manage to shed only a pound a week for the rest of the year I might just only be “overweight” by Christmas.
As I made my brekkie (toast and jam – three hundred calories) I wondered if maybe muesli might be a better brekkie for me. I might get some and find out.
Interestingly the people who provide my calorie counter emailed my today with some weight loss tips. Nor much as I admire them for the calorie counter and the database of the nutritional content of over two million different foods, I was rather dubious about advice being offered by someone by the name of Jackie S Womble.
There wasn’t much happening on Facebook this morning, but I saw that CAMRA had announced its “Dover pub of the year”. I wondered about asking how the decision had been made; for several years I was a member of CAMRA’s  Ashford branch and never heard anything from them whatsoever from one year to the next. I used to get wound up when the local branch would declare its local pub of the year and claim that the membership had decided it when neither I nor any fellow members of my acquaintance had never been asked.

I set the washing machine going and set McAfee scanning my lap-top, then got the dogs organized and took them round the park. There was a minor disaster when we found our way blocked by some tree surgeons. I say “blocked”; we could walk round easily enough but it involved walking round by going through a swamp. Once past the swamp we met Oscar; a little pug who Treacle actually played with for a while. Fudge behaved himself mostly; there was a near incident when he tried to join in with OrangeHead’s posse, but one of their number stopped and caught him for me. She knows what a pain he can be.

We came home; both dogs had the mud washed from their undersides. I hung out the washing and put more in to scrub. "er indoors TM" had sorted some rubbish for the tip so I loaded that into the car together with four black sacks that (for no reason that I could fathom) the bin men didn’t take. I collected Cheryl and her mate (who were on the way home from town), got Cheryl’s old mattress, and took a car full of rubbish to the tip.
The tip was rather busy for a Tuesday morning. Things might have been easier for me had I not been followed by one of the staff who was constantly telling me that towels went in the household waste. I assured him that I had no towels, but he wouldn’t let it lie. I showed him the rubbish I had; old clothes, a broken vacuum cleaner, a cracked bowling ball… still he wouldn’t shut up about towels.
With rubbish unloaded it was only a short hop from the tip to the shingle shop where I bought four bags of red granite. It is surprising how heavy those bags of shingle are. I got them into the car easily enough but had to seriously strain getting them from the car into the back garden.

I hung out more washing, then put undercrackers in to scrub as I watched another episode of “Jamestown”. It was odd. The show started off being a period drama and it carried on like this for the first season and most of the second season. And Jocelyn’s heaving bosom was a little (not so little) bonus. Now it has suddenly become a zombie-horror show, and Jocelyn has put her bosom away.
What’s that all about?

I took myself off to bed for the afternoon. I slept reasonably well. I would have slept better had the dogs not been barking at random shadows for much of the time. I woke just after five o’clock and spent an hour devising a geo-puzzle which I might hide for the gratification of humanity (or that fraction of humanity which likes hunting Tupperware) later in the week.