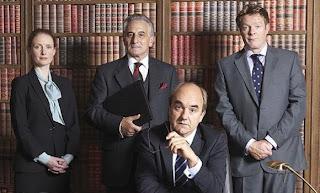 I was absolutely all-in when I got home last night and I went to bed almost straight away. I opened the hall door before I put Furry Face to bed and he took the opportunity to sneak up the stairs when he thought I wasn't looking. I pretended not to notice him, and we were both soon fast asleep. And again I was woken at 2.30am. This time by a car alarm going off. I did notice that Fudge wasn't on the bed at 2.30am. He must have been busted by his nanny. She's mean to him like that.
The alarm went on for a little while - I was just on the point of thinking that it might have been my car alarm, and was wondering if I should go and do something when the noise stopped. I eventually nodded off again, and woke at 7am with backache. I always seem to have a backache if I am in my pit for too long. This backache is probably the result of an old rollerblading injury (!) - it comes on from time to time, and lasted all day today.

As I drove to work I saw that most of this current load of snow had gone, but I did see one car which (for some reason) was completely covered in snow apart from a little "port-hole" that had been cleared so the driver could see dead ahead. The rest of the car was encased in snow and ice. Dangerous!
And then there was a traffic jam. Two buses were passing each other in the narrowest part of the road, had stopped, and the drivers were having a natter.

The news of the day was focussing on the collapse of the HMV group. Future readers of this blog will look on HMV in the same way that they will look on Woolworths, Comet, Rumbelows, Plummers, VG, Grace Brothers, and the East India Company; historical names. But for those of us who grew up with these companies, their passing is a shame.
Mind you can we really be surprised that HMV has gone west? On their shelves are DVDs and computer games that can be bought for a quarter of the price in any supermarket.
HMV's management blamed the internet culture for their demise. They may well be right. Personally I can't help but feel that within my lifetime shops as we know them will become a thing of the past. Fresh produce and groceries will remain in Tesco and Asda, as will whatever durable goods they choose to put on their shelves. But it will be the groceries and perishables which will keep future shops going. Everything else will go mail-order via the internet because that's the cheapest way for the seller to operate.

Once I was at work I realised that I'd forgotten to pick up my lunch. And I had very little choice for where I could get some emergency back-up lunch. My having little choice meant that the retailer had the upper hand, and I ended up paying way over the odds. I paid far too much for rather manky food and fruit which was grudgingly sold to me with a complementary bad attitude.

I did my bit at work, and came home. Normally being Tuesday I would gather with the clans, but because I was on a 10pm finish I missed out. Which was a shame - I like the weekly gathering. And whilst I don't mind the 10pm finish, the drive home is a pain. I always find myself stuck behind a car which drives for fifteen miles at 25mph in a national speed limit. And just to really boil my piss this one drives right down the centre of the road so I can't overtake.

Once home we watched the first episode of the re-made "Yes Prime Minister". It was quite entertaining; I liked all the characters; they were (in varying amounts) true to the original. Even if Bernard Woolley needs a haircut.
I shall be interested to see how the series pans out...