I can’t believe it’s a year since I got my new car. I still think of it as the “new” car – even though I’ve had the thing a year. I really should look in the manual and find out what all the lights and switches do. I was up and loading the car up for the weekend before 9am this morning. I think I’ve now loaded everything except my own personal stuff, but I’ve a nagging feeling I’ve left stuff behind. I can only find one burner. And since ‘er indoors (TM) has decided to use the camping store as somewhere to hoard rubbish, it’s tricky to find everything. I’m not sure why we need to keep a broken DVD player, but what do I know?

The morning’s post brought a letter from HMP Slade. He seems impressed with the bongo mag in several ways – with the effort I went to in order to procure said literature, with the fact that he’s been allowed to have it, and with the content. I’m told it’s a tad racy. I’m glad to hear it. Apparently another inmate has asked to borrow it – he’s not so impressed about that. I then spent an hour trying to phone through to the chokey to confirm next week’s visit. After an hour someone finally answered. Unfortunately it was the nice lady who was covering someone else’s lunch break. She admitted that she didn’t have the faintest idea of what was going on, and all she could do was to ask me to call back later. She seemed quite amazed that I wasn’t keen to do so, but as I pointed out to her, it had taken me three and a half days to get through, and I was reluctant to give up so easily. She took my number, and someone did phone me back later to confirm all was OK for next week.

I then went into town for some shopping. I’ve lost my flannel, and my canvas shoes are falling apart. They were easily replaced. But my bottle opener is falling apart. Whilst you can get cheapo bottle openers easily enough, my old one had a saucy photo of Kirsty Gallacher on it. That wasn’t so easily replaced. And a holdall – the one I normally use is now part of “My Boy (TM)’s “Operation Haddock” and so bears just the faintest aroma of fish. A new holdall in Milletts was sixty quid. So I went to Argos and got something comparable for less than a tenner. It pays to shop around. Whilst I was mooching about, I ran into Martin, and Pam & Di. 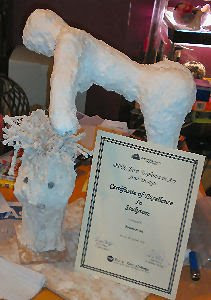 To the college to help “Daddies Little Angel (TM) home with her sculptures. We brought those home in a taxi where we found “My Boy (TM) mucking about in the garden with his new fishing “bivvy”. For the uninitiated, a “bivvy” is a tent that you take fishing. The only difference between a “bivvy” and a tent is that a “bivvy” is about ten times the price of a comparably sized tent. 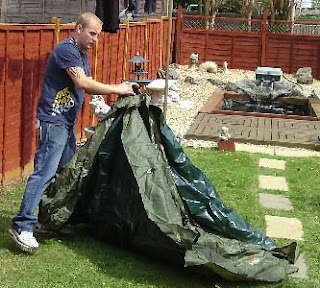 And lastly for the day was a trip to Asda. Whilst the catering staff did shopping, I got in some essentials for the weekend’s camping trip. A couple of gallons of ale, two bottles of port, fifty bags of crisps and some toilet roll. What more do we need?

This will be the last blog entry till Monday – “My Boy (TM)" is being left in charge at home. I can trust him with the fish, but if he wants to do a blog, he can write one of his own.
Posted by Manky Badger at 9:01 pm