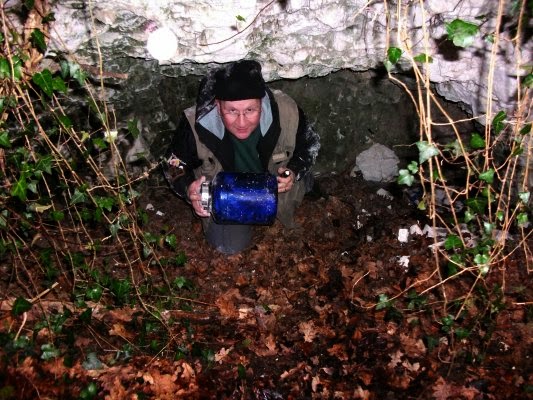 After far too much beer yesterday I was wide awake and checking out the Internet at 5.30am. Maybe not as raring to go as I may have been, but certainly drinking coffee. One hundred and four people had used social media to wish me well for yesterday's birthday. Those who run down social media don't realise that soppy sods like me actually enjoy the small things like that.

Being wide awake and feeling rather under the weather (for no explicable reason) I had a bowl of cereal and watched an episode of "Dad's Army". Private Pike had been turned down for the R.A.F because he had a rather obscure blood group. I realise that there aren't many people who know that an obscure blood group would not justify turning someone down for military service. I also realise that there are even fewer who know that "Dad's Army" was set many years before obscure blood groups were even discovered. But it was a failing in the plot which spoiled the show for me.
I then carried on writing a Wherigo which is now ready to be tested.

"er indoors TM" leapt into action, we rallied the troops and set off to the north of the county. The "Nash Street Bash" was billed as a four-mile geo-walk. Admittedly we did wander off here and there to pick up a few extra caches as we walked, but we ended up having covered seven miles.
The day started bright, but cold and the going was rather muddy. The dogs were mostly well-behaved even if Fudge did get stuck in a thicket at one point. We did have episodes with horses and with drain covers, but such is life. In retrospect if I ever see another series with quite so many multi-caches I shall do it in the summer; ten multi-caches made for a lot of standing around getting cold.
Towards the end of the day we saw one geocache on the map which was just a little way off of our route. It would have been a shame to have missed it so we thought we'd have a look-see. I was glad that we did; we found the cache was concealed in a dene-hole. Great fun to get to; my dog refused to climb down with me.

The BBC weather forecast had predicted rain, but not till 5pm. The rain came shortly after 3pm. Weonly had half a mile's walk in the rain, but we did get wet.
I even took a few photos whilst we were out.

After a rather good bit of tea "er indoors TM" set off bowling. I settled in front of the telly for an evening of "Big Bang Theory" with a small dog curled up next to me. Snoring. As I watched the exploits of Sheldon and Leonard I messed about on-line and organised next Sunday's geo-stroll. If any of my loyal readers fancy traising through nine miles of mud in an attempt to find unwanted tupperware next weekend, just drop me a line and I'll send details...