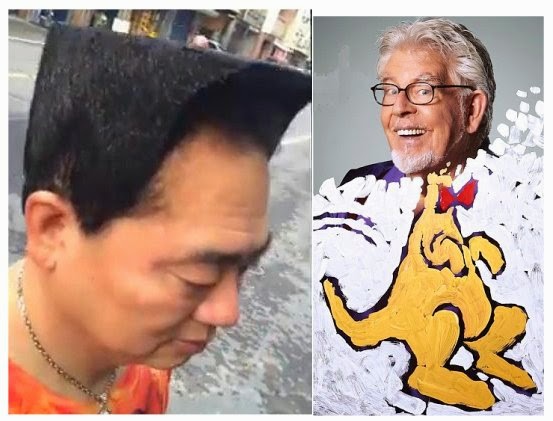 It was a hot night last night; I was rather restless, and was up and about having the washing machine doing its thing before 6am. My dog wasn't up though. I'm a little worried about him. Yesterday he seemed rather subdued; he seemed especially listless when we went round the park. I think the heat is affecting him.

With nothing new geocachical in the area I set off to work. Friday; the last day of the week. I really don't like a five-day week. I much preferred a three day working week. Even if I was working much longer days on the days I had to go and do something.

As I drove I listened to the news as always. Her Majesty was off to Scotland to name the navy's latest aircraft carrier.
I say "the navy's"; apparently there is still some three years until the ship is actually handed over to the navy. And then another three years until the thing is actually put into service. I can't help but wonder what will take six years if the ship is actually afloat and being named today.
And here's a thought... the ship was built in Scottish shipyards. If the Scots do go independent, what will happen with the navy? Will they get half a dozen frigates and a minesweeper, or will the fleet move to Portsmouth and the Scots have to start building their own fleet?

I did have a snigger when I heard about a fellow who has been labelled "Blockhead". This chap does the same job that I do, albeit half way round the world in Taiwan. He's a few years older than I am, and in a shallow attempt to get into the knickers of someone younger than my daughter he's given himself arguably the world's most stupid haircut. Fortunately the young lady in question has figured out what this fellow is up to, and has made a public statement. "...My friends call him blockhead, I can imagine he might have found someone as he had a good and respectable job as a medical laboratory scientist at the National Taiwan University Hospital. But he should act his age."
To be fair to "Blockhead" he is probably actually acting his age; if I had any hair left I would get an equally stupid haircut. Mind you in my case it would be because I could; not in any lame attempt to get into some bimbo's undercrackers.

Talking of people old enough to know better I spent a little while following the Internet's live feed of Rolf Harris's appearing in court for sentencing today. Found guilty of four counts of making indecent images as well as twelve counts of indecent assault he's been sent to prison for nearly six years.
Is this really justice, or just a modern day equivalent of watching Christians being thrown to the lions. Look at the public fascination in the recent trial of Oscar Pistorius or a few years of O.J. Simpson. We love watching the downfall of others, don't we?
I can't help but feel that the whole Rolf Harris case needs to be viewed with some historical perspective. I'm not defending him, but look at the re-runs of "Top of the Pops" from thirty years ago which are all over UK television. Scantily clad young ladies are openly all over whoever they feel is famous. And watch any television shows from the time when Rolf committed his crimes. "On the Buses", "Man About The House", "Are You Being Served", the "Carry On" films or the "Confessions" films. Even Fletch's daughter Ingrid in "Porridge" to name but a few. Men would regularly goose up women on stage and screen; it was regularly and constantly portrayed as socially acceptable.
It might not have been right, it certainly isn't seen as right nowadays. But that was how things were at that time. Can we really apply the morals of one generation to another? As his defence lawyer said this morning all of these crimes are from over twenty years ago.

Mind you the bit about making indecent images and child pornography on his computer is news; that hadn't been revealed before. That's entirely a different matter...
...but has anyone actually been harmed by his having this stuff? Just because we might consider him contemptible doesn't necessarily mean he should be punished for being contemptible does it?
I don't know...