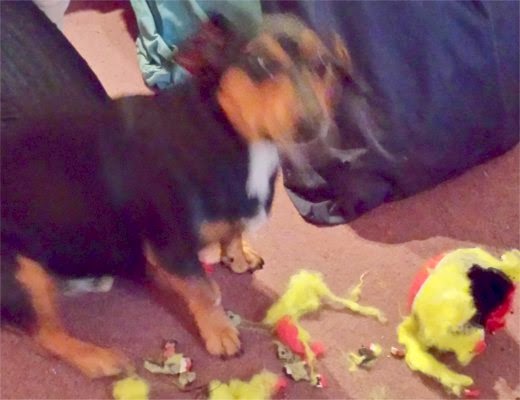 Last night's bottle of red wine was washed down by a bottle of "Bishop's Finger". I slept well. As did "Furry Face TM" who managed a whole night without a woofing fit.
I had a rather quick brekkie today and got on with the business of loading all the camping gear into the car. We seemed to be missing half of a kettle (got the lid!) and the entire turdis.

With most of the stuff I need to worry about loaded I got much of the stuff that "er indoors TM" looks after into the living room. I hope I have it all; I had this theory that she might give it all the once-over later. As I was loading up so my dog was getting progressively more and more over-excited. He knows that if I don't vanish off to work at sparrow-fart then he is up for a walk.
So we went on our walk. Down through the park. With the fun fair in residence the place has something of an air of a gypsy encampment during the day time. As we walked we met up with our old mates (!) "OrangeHead and her Chunky Little Friend". Fudge had a minor battle with the dog of one of their associates much to OrangeHead's dismay. I would have thought that an Alsation the size of a cart horse would have been able to stand up to a rather small Patagonian Tripe-Hound, but what do I know.
Pausing only briefly to steal the tennis ball of a passing cocker spaniel we carried on to Singleton and into Great Chart. A geocache I'd hidden over there in February had been reported as having gone missing, so I put a replacement one out there.

As we walked I posted a photo of "Furry Face TM" spuddling in the river onto Facebook, mentioning we'd seen "OrangeHead and her Chunky Little Friend". We came home to a message from a friend who knows both "OrangeHead and her Chunky Little Friend" of old. Apparently these two are single handedly responsible for the demise of the kingfishers from along the river Stour. I am reliably informed that "Chunky Little Friend" once fell in the river. Having phoned the Fire Brigade to get her chunky little friend rescued, "OrangeHead" then made an official complaint to the local council who re-landscaped that bit of bank. Consequently the kingfishers nests were disturbed and not one has been seen since.
It speaks volumes that these two need the Fire Brigade to get them out of a river which is three feet deep (at most).

I then spent an hour or so reviewing Earthcaches, and when "er indoors TM" got home we set off to the farm where we found the errant lavatory. As we were already half way to Maidstone we carried on; there was a geo-meet taking place there in honour of a chap who was over from South Africa on holiday. Geo-meets are always good; it's always good to get really nerdy with other people who understand why you are getting really nerdy. Normal people don't understand hunting tupperware.

We came home via McDonalds at the M20 junction eight services where some foreign-looking fellow wearing what I can only describe as his mother's pyjamas narrowly avoided having seven shades of sh*t punched out of him by a "delightful young lady". I have no idea what the squabble was about, but it was certainly entertaining.

Once home I showered, caught up with what had happened on-line, and patiently waited for "er indoors TM" to finish her packing before I could go to kip. In the meantime my dog played nicely with his new ball.