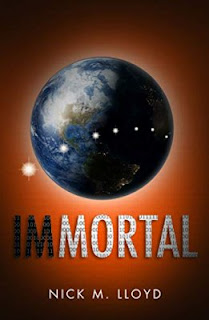 I woke feeling refreshed, full of energy and raring to go only to find that it was a quarter past one. I dozed on and off for the rest of the night, finally giving up trying to get to sleep at six o’clock.
Over a bowl of granola I watched a couple of episodes of “Love Death and Robots”. They were good; why hasn’t the general public latched on to this show? I then watched another lecture about plant memory before peering into the depths of Facebook. It told me that one of my nephews was having a birthday today. He’s twenty. Twenty!! – and he is one of the younger ones. Where does the time go?
I had a few emails this morning. Several comments on blog entries over the past year. All trying to sell stuff. I reported the lot to the feds at Blogger; I wonder if anything will come of it? And LinkedIn suggested I might like to chum up with Kate Heitzman who is the boss maths teacher at a school in Tonbridge. With that unusual name I suspect she may be in some way related to a chap with whom I was at primary school some fifty years ago. But that struck me as a rather tenuous reason for anyone to suggest a friendship; cyber- or otherwise.
I created the last three checkers I needed for my new geo-series, then got myself ready to brave the journey to work.

As I drove up the motorway (at fifty miles per hour) the pundits on the radio were talking about the latest Brexit debacle. Parliament had decided that they would come up with a Brexit deal, and yesterday's parliamentary time was dedicated to doing that. In a move which has amazed everyone the world over, Parliament has thrown out pretty much any conceivable Brexit deal, as well as having thrown out the possibility of no Brexit deal whatsoever or of no Brexit at all.
There are those of my loyal readers who say they don't understand politics... what has happened is akin to going to a car showroom and announcing that you won't leave until you've bought a car, but don't like any car on the market. Or akin to going to a restaurant, demanding dinner and refusing everything on the menu.
It is just like how my four-year-old grandson behaves when he is having a tantrum.
Realistically it is an utter failure of democracy. What do you do when there is no agreement whatsoever? Someone has to make a choice knowing full well that large swathes of the population won't like it. Interestingly the Prime Minister has offered to resign over it all. But what will that achieve? Whoever takes over will have the same problem. The country is in an impossible position. Have I ever mentioned that democracy is a silly idea?

At lunch time I slipped out and went over the road from work where there is a charity shop. I bought a fake apple which will come in useful with the geo-series I'm working on, and I then went on-line to Amazon to order some camouflage tape to disguise the film pots which I shall shove under rocks to create this new geo-series. I've arranged to have the tape delivered to the Amazon locker at work some time tomorrow. Every day I look at that Amazon locker, and for some odd reason I get really jealous of people who are collecting stuff from it. Hopefully my turn will come tomorrow.

As I then scoffed a sandwich I finished another e-book. “Immortal” by Nick M Lloyd was… well… I bought this book as it kept cropping up on my Facebook feed. I read it right the way through which (in all honesty) is more than I have done with some e-books I've bought recently.
But...
Goodies that turn out to be baddies and a rather one-dimensional villain are rather standard in many books. And although the ideas and concepts presented were rather thought-provoking, I originally encountered them in sci-fi over thirty years ago. Not a bad book really,,, but not great. Amazingly if you look at the book’s entry on Amazon ​it has nothing but five-star reviews. I couldn’t really score it more than three stars, but seeing how everyone else has raved over the book I didn’t leave a review.

With work done I came home (as most people do) and started putting camo tape on those film pots I intend to stick under rocks next week. I got twelve taped up; twenty more to do.

"er indoors TM" then boiled up a rather good bit of scoff which we polished off whilst watching “Young Sheldon” and “Derry Girls”, and then followed up wth port and stilton (the dogs like cheese!)
I then had a look at the household accounts. Not too shabby really… could be a *lot* worse.

I was supposed to have been on a night shift today. I swapped at the last minute… I’m sure I would have had a much duller day had I done the night shift.