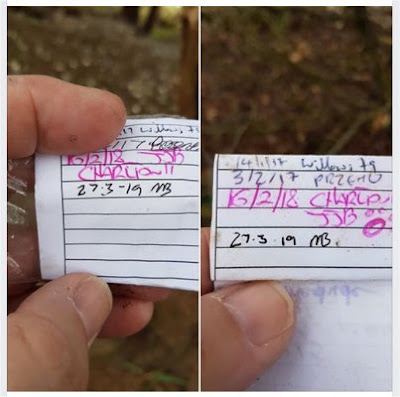 I slept rather well last night, but I had something of a rude awakening with a rather loud crash when Pogo fell off of the bed just before getting-up time.
I made some toast and scoffed it whilst Fudge sat with me on the sofa. As we scoffed I did another instalment of my Coursera course – short term memory of plants this time. I could have done more, but I heard movement upstairs (not just dogs falling off beds) so instead I did my usual trawl of the Internet. I saw that Stevie had been taken ill overnight and was broadcasting to Facebook from the local hospital. About the only thing I miss from that place is not being able to easily visit friends when they are poorly.
I did get cross with a certain family member who was spreading lies and misinformation about Brexit on Facebook. He wants out of the EU. That’s his opinion. However to support this position he is filling his Facebook page with stuff that he all but admits is lies; saying that he just wants people to talk about it. But what is there to talk about when any given item of (so-called) discussion is either factually wrong or is a thinly-veiled racist attack?

The dogs were keen to go for a walk this morning. I wasn’t. I’ve come to dread taking them out; it can be hard work. But despite Pogo tiddling on Fudge’s head, today’s walk went rather well. Pogo played nicely with other dogs and didn’t try to fight with anyone (on or off a lead). We met OrangeHead and her Chunky Little Friend and even that passed off without incident.
I got the eyelash-flutters from the Jehovah’s Witnesses again, but (to be honest) the appeal of that was as nothing to that of the bouncing chest of the lycra-clad joggers. I *think* the Rovers Witnesses have got to up their game a little to compete with that.

Once home I gave the pond fish some cornflakes. They seem to like cornflakes. I then tried to set the dishwasher going, but I found a vital component had fallen off. I fixed it and set it loose on the crockery, then created some more geo-checkers as one does (only five more to go) and learned some more about memory in plants (Coursera is great!).
I then set off in the general direction of work. I don’t like leaving the dogs, but all three were fast asleep.

I took a rather circuitous route to work this morning. About mid-way between home and work is Findings Wood. There are two geocaches in there that hadn't been found for over a year. Could I go for a double resuscitation? I went for it... The first one was a straightforward find. The second one not so. The hint said "under flint"; I arrived to find lumps of flint as far as the eye could see. But I had an idea of what to look for... I wasted twenty minutes rummaging about then found the cache in exactly the sort of place I thought I should have looked for in the first place.
As I hunted for Tupperware I was rather aware of something or someone nearby. I couldn't see anyone, but something big was moving about. Not in a frightening way, but certainly not in a stealthy way. Was it deer, perhaps?

Pausing only briefly to get petrol I drove in to work and had a rather good bit of dinner in the works canteen. Spicy chicken and chips; syrup sponge pudding with custard. Very tasty. Suitably replete I got on with a rather busy late shift. Mind you I was working with a weather eye on the travel news. There were several reports of the motorway home being impassable. For all that I am far happier working where I am now compared to where I used to be, there is no denying that the journey to and from work can be somewhat fraught at times.

The journey home wasn’t bad; but finding somewhere to park took some doing.