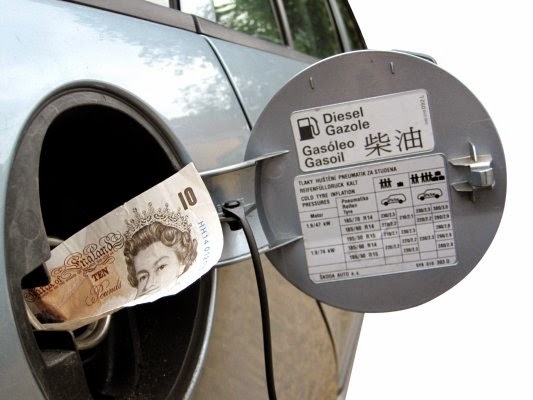 Another good night’s sleep marred only by getting up to find that “Furry Face TM “ had had a little accident overnight. He did look incredibly embarrassed about it. I wouldn’t have thought a dog could look embarrassed, but my one can do it rather impressively.

Over brekkie I read that petrol prices are again falling. This seems odd to me. A little while ago when petrol prices were going through the roof we were told that his was due to instability in the Middle East (where much of the petrol comes from). But the denizens of the Middle East are still bombing seven shade of sh*t out of each other and petrol prices are falling.
The real reason for the rise and fall of petrol prices is actually nothing to do with having to pay people danger money to work in a war zone. It’s to do with the futures market. I’ve always been vaguely aware of it, but this morning I looked a little further into the matter.
Basically the futures market is a scam in which those with money make promises to buy and sell stuff at future dates. They will buy fields of crops before the seeds are even sown; sell all sorts of manufactured goods before they are even made. And play all sorts of silly beggars with oil prices whilst the stuff is still underground. Consequently prices of petrol (and all sorts of other stuff) rise and fall seemingly at random.
And we all meekly go along with it…

I took my dog for a walk; we went up through Bowens Field and along by the river where various workmen are cutting down all the trees by the river. There was some sign about flood defences; I suppose they know what they are doing. I would have thought that dredging might have been a better idea. We carried on to Singleton Lake where I did a little research for my latest geo-project.
We came back home through Viccie Park where OrangeHead was holding court with a gaggle of cronies. “Furry Face TM “ fought with the dog of her chunky little friend for a while and then we came home.

On Tuesday I spent much of the day making a Wherigo. For no adequately explained reason in the meantime the thing has packed up and died, so I spent a few hours today trying to breathe life into its corpse. I *think* I’ve succeeded; I shall have a little test tomorrow and find out.
It’s amazing how much time you can lose in a Wheri-project. Before I knew it the day had gone, and it was time for sax lesson. I had intended to have had a little tootle before the lesson today, but time had run away with me.

I went along not in the best of frames of mind. Of the three exercises I’d been set this week I was only really happy with one of them. One wasn’t working for me at all, and I just can’t do anything with a chromatic scale. But sax lesson went well; it usually does.

I then came home and spent a rather dull evening ironing some shirts. It’s only two weeks till Christmas. I’m not feeling it this year..
Posted by Manky Badger at 9:21 pm