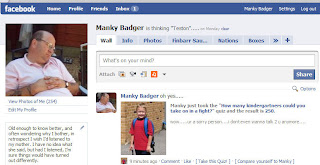 I see an Archbishop has declared that Facebook is the work of Satan. Apparently it undermines society. Some people will trot out any old rubbish to cover up the fact they cannot use a computer. Computer illiteracy these days as a handicap must be on a par with being unable to read or write. So rather than carrying on in ignorance, why not learn to operate the thing? It’s not difficult.

But this prompted me to have a look at my Facebook account this morning. I have 153 friends on it. I say “friends” – there are a lot of close friends and some people from work who are on there that I see face to face at least weekly. It’s fun to see what they are up to on a daily basis. There are quite a few people that I’d like to see a lot more of, but distance prevents it. Facebook is an ideal way to keep in touch. There are family members on there who otherwise I’d only ever hear from at Xmas and funerals.

And there are five people I don’t know from Adam. Who on earth is Alison Green from ? I’ve looked at our mutual friends. Two are people I also don’t know, and the other two are both very good friends to me, but I’m sure hardly know each other.

Facebook also suggests people you can add to your friends list. It keeps suggesting I should buddy up with Lorraine Bray. I’ve no idea who she is. She only has one friend on Facebook – one Chris White who is similarly utterly unknown to me. Another frequent suggestion is Keryl Gardner who also has no one at all in common with me.

You can play silly games too. “Bricks Breaking” and “Farkle” are fun. There’s my nation – “The People’s Republic of Badgerland”. And I use Facebook as an on-line photo album.

You can put your status on Facebook too. I try to put up sarcastic and amusing comments from time to time. A friend of my nephew uses his status to inform the world of the blow-by-blow turns of his on-off relationship with “Sophie”. And his mother uses her status to make personal comments at whoever has most recently hacked her off.

A cousin is currently making cryptically tearful comments on an hourly basis about her current life crises…. Perhaps the Archbishop has a point…