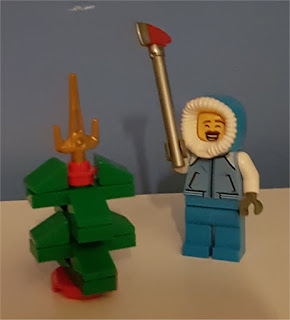 Over brekkie I watched another episode of “Big School” in which David Walliams attempted and failed to pork Catherine Tate.
I then had my usual root around the Internet. I saw that the dates for next year’s Brighton Kite Festival have been confirmed. Bearing in mind that the festival of ten years ago was definitely going to be the last, the event is going well. I’d like to go, but all the setting up and taking down of the tents is just too much like hard work. Maybe I might go down for the day?
Not a lot else had happened on Facebook, and with no emails of note I opened my Advent calendar, got dressed and set off to work.

Yesterday morning the thermometer in my car said that the outside temperature was minus four degrees. It was nine degrees this morning. What a difference.

As I drove the pundits on the radio were interviewing the boss of Marston's brewery. They were trying to get him to comment on political stuff and say bad things about Brexit. They weren't impressed when he suggested they should have been interviewing a politician.
Mind you they later interviewed Michael Gove and some woman from the Labour party; both of whom blamed each other for everything, and neither of whom made anywhere near as much sense as the boss of the brewery. Perhaps he should be running the country. I'm sure he could stage a piss-up there whilst I doubt any of our politicians could.

The radio's "Thought for the Day" section today was seemingly written with me in mind. Yesterday I whinged about how jealous I was of a friend; this morning some Buddhist warned of the dangers of "comparison anxiety". This is apparently sweeping the nation. The speaker warned that we shouldn't worry about how well we are doing compared to everyone else, as no one is completely happy. We should just be content with our lot. Sound advice. I should take it.  I suppose I *am* happy with my lot - I just want a lot more...

I stopped off at Aldi (as I was at Maidstone today). I had a plan to get "er indoors TM" a Christmas pressie or two. They didn't have anything worth having as a Christmas pressie (I assumed she didn't want a three-feet tall Kevin the Carrot), so I went in to work, I did my bit, and came home.
"My Boy TM" boiled up dinner today. It was rather good… unlike the rest of the day which was rather dull.