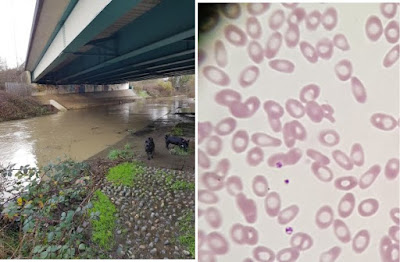 My phone went off at one o’clock this morning. It was the Environment Agency telling me there was a flood warning. I really should have a look at whatever it is that prompts these notifications.
I went back to sleep, and slept well. Perhaps this was the result of a good helping of my new cocktail. The Werther’s sweeties had (mostly) dissolved into the vodka by ten o’clock last night so I chucked in the cream, gave it a mix and had a go… In all honesty it wasn’t that bad really. As a “proof of concept” I think it was a resounding success, but I must admit that the Werther’s flavour could be replaced with something better. And "er indoors TM" says I put too much cream into it. I have a plan for a Mk II.

I slept through till after eight o’clock when I started the dog tiddle routine. With four dogs this is quite the process. Fudge can be trusted unsupervised, but Sid can’t, and I’m beginning to have my reservations about Pogo. I’m wondering if having seen Sid have “little potty accidents”, Pogo thinks he might get away with it too.
Over brekkie I had a look at the Internet. I think I need to tweak the settings on Facebook. I love Facebook because I love seeing what people have been getting up to, but this morning I saw pretty much nothing but the same six adverts posted on a dozen different selling sites.
I wrote up a little CPD, then programmed “Hannah” for tomorrow. Again I struggled with GSAK. I think someone at geocaching dot com has fiddled with the settings. The thing was finding geocaches ten miles from where I’d centred it, but not the ones at the centre which was the ones I wanted. I’ve found a work-around… who would have thought that rummaging in the undergrowth for plastic pots could be so stressful.

We took the dogs for a walk; we went up to the river to see what all the flood warnings were about. Admittedly the river was rather full, but I've seen it higher, and we do live quite some distance from the river as well. I don't think the Environment Agency needed to phone me quite so early.
As we walked I found a Munzee - I was First to Munz. The thing had been out for three weeks and no one else had been near. No one rushes out for new Munzees like they do geocaches.

We came home, and I set off for work. The pundits in the radio were staging yet another post-mortem of the Labour party's recent crashing defeat in the recent General Election. It would seem that pretty much everyone but the Labour party themselves is of the opinion that Jeremy Corbyn lost the election single-handedly, and that the sooner the Labour party realise this, the better it would be for themselves.
To be honest I soon got fed up with them re-hashing the same old arguments, and I turned over to listen to my rather odd choice of music.

I eventually got to work; the A21 was gridlocked so I diverted cross-country.
It wasn't my original plan to work this afternoon. I had all sorts of better things to do today. But a colleague had gone off sick at short notice, and with very few people not already working this weekend who weren't hundreds of miles away on holiday I thought I could step into the breach. If nothing else it should stand me in good stead for not having to work any other shifts at short notice over the Christmas period.
Work was rather busy - and I even found a new case of hereditary elliptocytosis. Go me!!

I came home via Steve and Sarah's. The original plan was for me to have spent the evening there, but that was not to be.
"er indoors TM" needed picking up as the "er indoors TM"-mobile's clutch had possibly gone west. It was good to catch up with friends. What with one thing and another I’ve not been in touch as much as I have been. Must remedy that in the New Year…