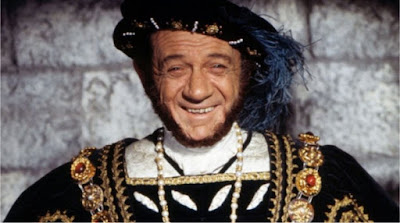 Perhaps it was all the driving yesterday, perhaps it was the port and cheese last night. But whatever it was I slept like a log. It was a shame that I woke feeling quite so grim – was that the port?
As I scoffed toast so Sid sauntered downstairs. I take no chances with him – he went straight outside where he did “both flavours of business” for which I was grateful. He went back to bed; I thought about doing so, but I was up. I had a little look at the Internet. The couple of piccies I’d posted last night had got one or two comments. And (unlike yesterday morning) people had been posting up pictures of what they’d been up to. Being a nosey person I like seeing that.

We had intended to take the dogs out, but the torrential rain put us off of that idea. Instead we slobbed on the sofa and watched “Carry On Henry”. The film was rather good, but it was such a shame that they had to put on such depressing adverts.
With a little while spare, I had a look at the monthly accounts. As I always say, they could be better but they could be a whole lot worse. Is it wrong of me to want a *lot* more money?

"er indoors TM" served up cold meat and pickle which I devoured, then I set off towards work. Months ago when we were asked what shifts we'd want to do at Christmas time I chose Boxing Day late shift thinking it might suit me best... I wish I'd chosen a shift earlier in the holiday now. And I must admit that (yet again) I have to question my choice of career. A rostered shift on Boxing Day got me paid at time and a third. A friend (in a completely different line of work) was offered a thousand pounds for two hours' work yesterday. And he turned it down too!!

As I drove up the motorway through the rain I was rather amazed at just how much traffic there was. It wasn't really any different to any other day. As I drove the pundits on the radio were talking about how much money people spend on sporting activities... not so much doing the activities, but on joining the clubs. Apparently golf clubs across the country are struggling because although there's just as many people wielding golf clubs as ever, there's fewer and fewer people wanting to pay to be a member of a golf club.
I suppose that the general public are asking themselves if they want to actually do an activity, or just talk about it.

I drove to the petrol station; with the "er indoors TM" -mobile out of action and me doing the driving at the moment we've used a week's worth of petrol in two days.
Suitably re-fuelled I then went in to the late shift. For all that I might have grumbled about it, and for all that lone working does have its moments (like my bank accounts) it could be a whole lot worse.
I did my bit; I scoffed some of the mince pies which had been left over from Christmas Eve. There was quite a bit of food left over from Christmas Eve; I could have scoffed loads, but I think I ate too much yesterday. I wasn't feeling on top form and I left loads for those coming after me.
I’ve felt rather grim all day… perhaps an early night might sort it out?