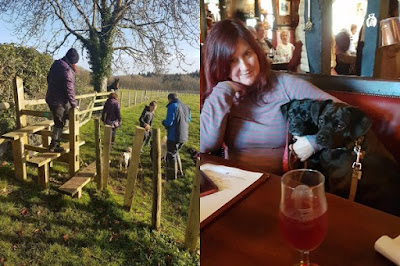 I had a much better night in that I was in my own bed rather than sitting in the A&E department. Sleeping on my back (as advised by the A&E doctor) did make for a much less painful hip.
I got up, tiddled the dogs, and saw that yesterday’s high winds had brought the fence down. Hopefully my hip will be up for fixing that next weekend? Two years ago today I was out fixing that fence. Having those big panels doesn’t work as they catch the wind. I shall have to think about how I’m going to fix it.

As I looked at Facebook there was a *lot* of political talk going on still. Personally I’m of the opinion that the election is over, and unless anyone has got a time machine so they can go back and change things, then we should just move on.
There was also a lot of people wishing me well after my experience at the hospital yesterday. That was kind of many people. I’ve been giving the matter thought and I have decided to send the hospital’s patient experience department an email. I don’t want to put in a formal complaint. Rather than saying “you are a load of crap” I want to be constructive. They might consider doing blood tests and X-rays *before* patients see the doctor. How about not repeating the five-minute questioning six times. Why have a two-hour wait between deciding to do a blood test and actually sticking the needle in. And why put unnecessary cannulas into everyone (I’ve made a rough estimate that this alone could save a hundred quid a day).

We got the dogs organised. (with four dogs, that takes some doing) and we drove out to the countryside where we met up with Karl, Tracey and Charlotte. We had planned a little walk to conceal (rather than unearth) Tupperware. Bearing in mind my knackered hip I dd wonder if this was a good idea, but the doctor did say to exercise the thing.
We had a good walk. We walked for a couple of hours. Fudge only ran off once, but Sid did exceed the expectations of even his staunchest supporters by going rogue. He’s *never* wandered off on his own before. There’s no denying that we spent ten minutes sheltering from the rain, but the rain went just as quickly as it came. A bit muddy in places, but it was a good walk. If any of my loyal readers find themselves at a loose end on New Year’s Day they could do a whole lot worse than coming along for the geo-walk we planned today.

With walk done we popped into a local pub where we had a rather good bit of dinner. The home-made soup was excellent. The roast pork was particularly good, and the “tart of the day” (!) was rather impressive. Washed down with mild, Christmas ale and a glass of port, this was one of the better meals out that I’ve had for a long time. And (as the icing on the cake) the dogs were rather well-behaved too.
I took a few photos of our adventure.

We came home via WH Smiths where my piss boiled. I had a parcel to collect. In the past, parcels could be collected from the sorting office. Opening at six o’clock in the morning and closing at eight o’clock at night no one ever had a problem collecting a parcel. According to the Internet WH Smiths were open till four o’clock this afternoon. We got there at three o’clock; an hour after the post office bit had closed. I had a little rant at the manager. Why advertise on-line that you are open until a certain time knowing full well that you close two hours earlier?
I *could* come back tomorrow to collect my parcel… *if* they didn’t open an hour after I’ve left for work and close at the same time that I am leaving Tunbridge Wells in the evening. I’ve messaged the sender of the parcel to tell him that it will probably be returned to him as I have no way of collecting the thing.
You have to ask what idiot decided that this would be a good way to operate.
"er indoors TM" says she can collect it… here’s hoping.