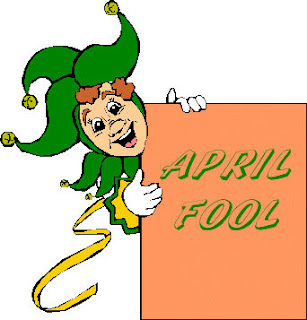 Bearing in mind the date, over a bit of brekkie I changed my Facebook status to read “Manky Badger can't believe he's going to be a grandfather”. I left this bit of bait up for an hour or so, but was disappointed at the lack of response – I was hoping for more. However at least one relative would seem to have been taken in. I’m wondering how long it will be before my mother is on the warpath.

I then took the opportunity to empty out my letters rack. I really should do that more often. I found all sorts of offers and money off vouchers which expired yesterday.

And so to work , where I spent much of the day in a reflective mood. Last night I went to what I fully expected to be a very boring talk at the arky-ologee club. I was wrong. The subject was dull enough – a computer program to index all the sites of historical interest in the county. But the chap giving the talk brought the topic to life. He was keen, enthusiastic, and had a very good PowerPoint presentation to illustrate his lecture. I couldn’t help but compare his talk to the one on the Knights Templar a year or so ago – a fascinating subject killed stone-dead by the world’s most boring speaker who refused to use any kind of visual aid because it would distract the audience from what he was saying.

Some of the talks at the club have been good – Joey on her Roman excavations, the love lives of King William and Admiral Nelson spring to mind. But they are more than outweighed by the dull talks. I slept though the drone on the River Wantsum, the origin of village signs was anathema, and I still scream whenever anyone mentions Bethersden Marble.

I’ve been thinking about the arky-ologee club all day, and on reflection I think it’s fair to say that I’ve come to expect that all the talks are going to be boring. But there will be the occasional one that is good. And it is the chance of getting an interesting talk that makes it worth the expectation of getting something dull.

Perhaps if the meetings started with a snappy introduction rather than with a confused rambling, and perhaps if we had one or two minor speakers giving five minute presentations on topics of current interest to supplement the main talk, and perhaps if the speakers used PowerPoint rather than being boring then maybe the club might take off. But at the moment I find myself comparing it with the astronomy club. There are so many details I could pick up on, but I suppose the bottom line is that I would recommend people join the astro club. In all honesty I can’t say the same for the arky-ologee club. Which is a shame.