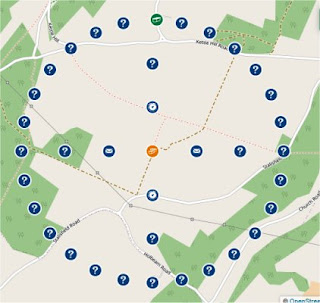 Over a bowl of granola I watched the last episode of the current series of “The Young Offenders” then peered into the Internet to see what I’d missed overnight. I hadn’t missed much at all.

As I drove to work the pundits on the radio were talking about how a quarter of the UK's mammal species are in danger of extinction. I listened with interest until I heard that this proclamation had come from the British Mammal Society, and then I stopped worrying quite so much.

A few years ago the British Mammal Society were on the morning's radio show. They said that no one really knew just what mammals were wild in the UK, let alone how many there were of them. They asked people to download their app onto phones. The idea was that people would use the app to photograph wild mammals and send photos to the British Mammal Society. Their experts would identify the creature you had photographed, and the geo-location ability of the phone would tell where the mammal had been seen.

That way they could establish exactly what animals were wild in the UK, and where they all were. A good idea in theory.

It took them about two years to respond to the first photos I sent in (squirrels), and I must admit I stopped using the app when they told me that some of my photos had been rejected. I'd photographed deer somewhere or other, but their experts said there were no deer where I'd taken the photo; the implication being that I was somehow playing silly beggars with them. I though the whole idea of the project was to find where these animals were? Why bother trying to find out what animals are where if they have already decided that they know the answer and won’t be told?

I've no confidence in this announcement.

There was also a lot of talk about how non-white children are more likely to get exclusions from school and all sorts of speculation was made about unconscious bias by teachers. A couple of non-white people were then interviewed. Both have made successes of their lives after leaving school. Both had many suspensions and exclusions whilst at school. And both said that when they were at school they were unruly little brats who got what they deserved.

Is it just me who sees all sorts or racial tensions being stirred up for no reason at all?

As I started the early shift so my phone went mad. The thirty-seven geocaches I'd hidden yesterday had all gone live. It wasn't long before I received messages that there were errors in the puzzles that I'd set. Some messages were polite, others not so.

Mind you there couldn't have been that serious a problem - it wasn't that long before I was told that all had been found for the first time (and more) - and not by the usual FTF-chasers. After the unpleasantness of last weekend (when we found we'd had our movements stalked so's someone could claim to be first to find a geocache), it was good to see someone else being first.

With work done I came home. I had planned to take the dogs to the woods for a walk, but as I pulled up outside the house the thermometer in my car said it was over thirty degrees; far too hot for dogs. So, as even more messages came in about the errors in my formulae I set about correcting my mistakes.

And with mistakes corrected I tuned in to the weekly geo-zoom meet.

"er indoors TM" boiled up a very good bit of scran which we scoffed whist watching an episode of “Taskmaster” (which was rather good), and then I started falling asleep in front of the telly.