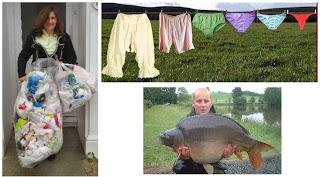 ““My Boy TM ” and his posse came home from their international excursions late last night. Despite getting more lost than is humanly possible around , they all seem to have had a good time, with plenty of photos of huge fish. Despite their feeling that the locals were perhaps the rudest people on the planet, there is talk of a return trip next year – I might just tag along too.

There are those who might think that because it’s Father’s Day I would get brekkie in bed. I knew I hadn’t a chance, but I lived in hope. Unfortunately I was disappointed (again). So I got up and did the washing. Following on from yesterday’s shopping trip for camping stuff I was still fired with enthusiasm for future weekends away, so I spent an hour going through the camping gear. Or more specifically, I emptied the two lock-up boxes in which we keep the camping gear (among other stuff) with a view to sorting out the wheat from the chaff.

Over the years we seem to have accumulated so much disused junk in them that they are full to overflowing, and they needed a serious mucking out. I had this plan to end up with one box containing things we always need on every camping trip (tents, chairs, tables, etc), and the other box containing stuff we sometimes use; such as inflatable boats, the buggy, etc., and we would then get rid of the tat which we don’t use that was cluttering the boxes.

I couldn’t believe how much tat we’d acquired over the years. I found four Vauxhall hub caps. How long is it since we’ve had a Vauxhall car? I found a car radio which has been missing for five years. I found the tent I used when I was in the Boys Brigade in the late 1970s. I found fragments of two tents which had both suffered damage at Teston in 2003, and were awaiting repairs. I found all manner of spare parts for our party tent which I can remember being delivered before a poker game some five years ago. And the gazebo collection – I found four complete poled gazebos which we don’t use, and probably never will. If any of my loyal readers feel they’ve lost a gazebo, I’ve probably got it. And the carrier bags: over the years ‘er indoors TM has been storing carrier bags in the lock-ups with a view to eventual recycling. We had millions of the things.

Pausing only briefly to bodge the washing line destroyed by “My Boy TM ”, we went on a quick shopping spree. To Tesco for printer ink and to recycle the carrier bags, and then to B&Q to get a replacement washing line. Whilst browsing in B&Q I was amazed to find they were selling the same tent as I’d bought yesterday. And they were selling it for forty quid more than I’d paid, and they weren’t selling it with the really thick groundsheet, carpet and door mat either. I think I had a bargain yesterday!

Needless to say we came home we found “My Boy TM ” had gone out, and so I ended up repairing his wreckage single-handed. Washing lines are tricky things to fix. If only I’d not been quite so generous with the line on the damaged part I would have had enough to have replaced both washing lines. As it was, I ended up being about a metre short of what I needed to do both. Oh well – the colours of the lines don’t match, but I shall wait until one or the other breaks before replacing them. I can live with washing lines of differing colours.

And then, as you can see, I played around with the blogger software. I quite like the new look. I hope the majority of my loyal readers do too – I’m not sure how to turn it back again…